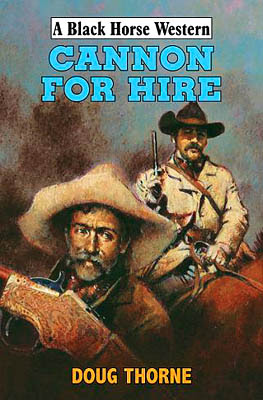 By Doug Thorne
A Black Horse Western from Hale, April 2011
It is the autumn of 1897, and men are flocking to the wild and woolly Yukon Territory in search of gold. But soldier-for-hire Tom Cannon has a different reason for making the hazardous trek north. The one-time cavalry officer has been hired to find Emmet Lawrence, a greenhorn who had gone to seek his fortune and then disappeared.
Time and again, as Cannon searches the icy wastes and snow-capped mountains, he draws a blank. No-one remembers Lawrence or knows where to find him.
Then, something happens that Cannon hasn’t allowed for. Emmet Lawrence comes looking for him….
Once Cannon has been hired to find Lawrence, Doug Thorne fills most of the first half of this fast moving book with the treacherous journey north. Descriptions of landscape, and hardships, making for some very visual reading, this includes an exciting ride aboard a flatboat where I had to wonder if any of the passengers would make it back to land in one piece. During this part of the book the author also takes time to fill the reader in on Cannon’s background and also explains why he risks his life for money.
Once Cannon arrives in Dawson the story ups a gear and action comes thick and fast as we discover just what has become of Lawrence. This leads to some excellent gunfights and then to a surprise ending for one of the main characters.
After finishing this story I couldn’t help but wonder if Cannon will return in more books, as this reads like it could be the first in a series.
Doug Thorne is a pseudonym for two writers: Alfred Wallon – a German author of many westerns in his home country, and David Whitehead – a well-published English writer. This book proves their teaming up is a very worthwhile partnership, and I hope we see more books from them very soon.
Cannon for Hire has an official release date of April 29th and is available for pre-order now.
Posted by Steve M at 16:15

You're right, Steve. David has mentioned the possibilities of more Cannon stories. For details see the article "Fargo Creator Sets Pattern" at http://blackhorsewesterns.com/bhe21/

My copy arrived today - makes the review quite timely.

I want to read this. Unfortunately, BHWs are hard to come by on this side of the Pond.

By the way, Keith, thanks for the link to the interview. Very interesting. I hadn't known about Ben Haas' "Thorne Douglas" pseudonym.