A Fistful of Legends 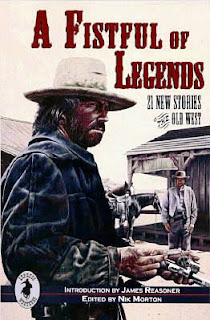 21 New Stories of the Old West
Edited by Nik Morton
Express Westerns, December 2009
Revenge, retribution, and deceit. Damaged men and sinister night stalkers. Humour, irony, and tears. Bank robberies, showdowns, and lynchings. Tragic doves, plucky homemakers, and gun-toting belles. Birth and death, love and hate…
Contents:
Dead Man Talking by Derek Rutherford
Billy by Lance Howard
Lonigan Must Die! by Ben Bridges
The Man Who Shot Garfield Delany by I.J. Parnham
Half a Pig by Matthew P. Mayo
Bloodhound by C. Courtney Joyner
More Than Meets the Eye by Gillian F. Taylor
Big Enough by Chuck Tyrell
One Day in Liberty by Jack Giles
Shadows on the Horizon by Bobby Nash
On the Run by Alfred Wallon
The Gimp by Jack Martin
Visitors by Ross Morton
The Nighthawk by Michael D. George
The Pride of the Crocketts by Evan Lewis
Darke Justice by Peter Avarillo
Angelo and the Strongbox by Cody Wells
Crib Girls by Kit Churchill
Man of Iron by Chuck Tyrell
Cash Laramie and the Masked Devil by Edward A. Grainger
Dead Man Walking by Lee Walker


This is the second collection of short stories to be published by Express Westerns, the first being Where Legends Ride, many of the same authors appear here as in the previous book as do a number of new writers, one in particular has to be mentioned: Peter Avarillo, who must be in the running for the youngest ever author to have a western story published. Peter Avarillo being a pseudonym for sixteen-year-old Chantel Foster.
This second anthology contains more stories than the first and in my opinion both books are excellent ways to try the work of authors new to you. This collection contains a wide spread of storylines and themes as indicated by the opening paragraph to this review, tales that will reach all the emotions as there are stories that deal with tragic situations – such as the terrific story from Lance Howard – and those that are more traditional in their theme. There are more light-hearted stories too and one that delves into the supernatural.
Mention must also be made of the story by Matthew P. Mayo, Half a Pig, that was a runner up in the 2010 Western Writers of America Spur Awards in the short fiction category.
Of course we’ll all have our favourites and those that perhaps don’t grab our imaginations as strongly as others, but one thing that can definitely be said about the whole collection is that they are all extremely well written and are a joy to read. With an excellent introduction by James Reasoner this is one anthology you should not miss.
Posted by Steve M at 14:11

It was a pleasure to be a part of this anthology and these marvelous writers. And to be in a collection introduced by James Reasoner! Well, that's just an incredible honor.

A special nod must also go to editor Nik Morton for doing such a masterful job.

Thanks for the review.

I'm glad you liked it, Steve, and thanks for the review.

British western fans can currently buy from Amazon.uk for £10 including postage, which with the way exchange rates are going right now is mighty generous of them.

Excellent review. I love this anthology and hope there will be more!

Hi Steve,
Thanks for the review. At the signing in Knoxville I sold several of each of the EW anthos and saw one fellow leaning in a corner, reading his copy of "A Fistful of Legends." He couldn't wait to dive in, I guess!

Steve, we want you and your readers to know that we have formed a new organization for professional writers of the American west.

WESTERN FICTIONEERS is intended as a supplement to the Western Writer of America. It is exclusively for writers of fiction. Membership is open to anyone who has a published novel, novella or short story credit.

We expressly wish to invite your British authors. You are publishing some excellent work on your side of the pond and we hope you will join us.

Our website is in development. In the meantime we hope you will help us broadcast the news about this organization.

Thanks for the review, Steve. And congrats again, Matt on your finalist award!