Known as much for his crime novels as his westerns Ed Gorman has written many highly acclaimed books in both genres. I must take a moment to thank Ed for agreeing to answer my many questions and hope you all find his comments as interesting as I did.

From second or third grade on that’s the only thing I’ve ever wanted to be. Jack London hooked me and then Ray Bradbury and then I began writing my own little stories. I’ve worked in advertising, written and produced tv campaigns for politicians, written and produced industrial films but I never lost sight of my goal. So for the last almost thirty years I’ve been writing fiction full time and have been lucky indeed.

My first three novels were suspense but I was lucky enough to be given the opportunity to do the first drafts of three different western series novels. I learned a lot from that experience and more importantly it gave me the confidence to write my own western, which was Guild. 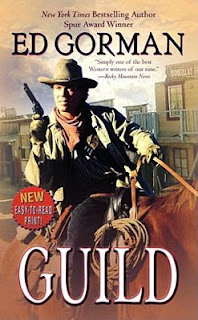 I’m never sure how to answer that. Dozens of writers have influenced me over several decades of reading. As for western writers influencing me I’d have to say Loren Estleman, Brian Garfield and Elmore Leonard.

Which past western would you like to see back in print and why is this?

Right now I’d opt for Clifton Adams’ Desperado and A Partnership With Death--Partnership has one of the most gripping first pages I’ve ever read. It’s not action, it’s introspection—how the bleak landscape defines the protagonist.


You’ve won the Spur Award, what was this for?

That was for my short story “The Face” which is an anti-war story based on my reading of the journals of a Southern doctor who performed battlefield surgery. Though I don’t think he intended it to be, it’s a powerful anti-war statement. (The Face can be found in the two books below) 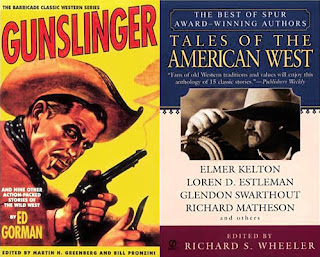 Are you planning to write more books about Guild and Dev Mallory?

Afraid not. There’s just no market for them. The Dev Mallory books not only earned out I made some royalties but it didn’t matter because they cancelled all their westerns. 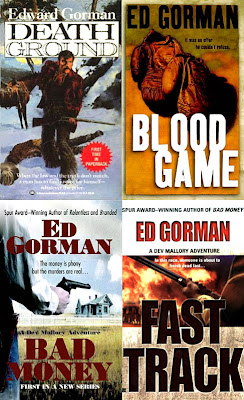 You wrote the Brothers in Blood series as David St. James. I always wished there were more than three, why did the series come to an end?

I’m smiling at your question first because I don’t know how you ferreted out that pen-name and second of all because they died without a trace. I got a number of angry reader letters about them. Too much sex, too much back story and too many liberties with the Canadian Mounted Police. Of course I got a few letters from people who liked them, too, one from an Australian man who’d written a number of Mountie novels himself. He seemed to like them especially. But as I said they went nowhere. 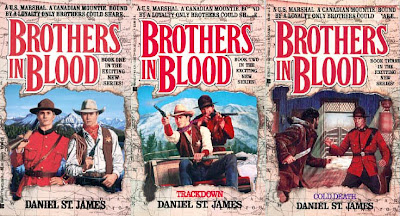 Do you prefer writing stand-alone stories or series books?

Stand alones. I like the fresh start number one and number two I hate having to look back through previous novels to get character histories etc. right. I’m lazy for one thing and for another I tend to see all the things I could have done better when I reread.

Do you prefer writing in the first or third person?

I think my natural voice is stronger in the first person though if I can really connect—really find the human center of the book—then the third person is preferable because you can do so many more things with it. I have a very long very dark suspense novel coming from Leisure in July called The Midnight Room. I spent seven months on it. I’d been writing first person straight on for several years so I struggled with Midnight at first. But when I finally got going I told a far richer and far more suspenseful story than I ever could have in first person. 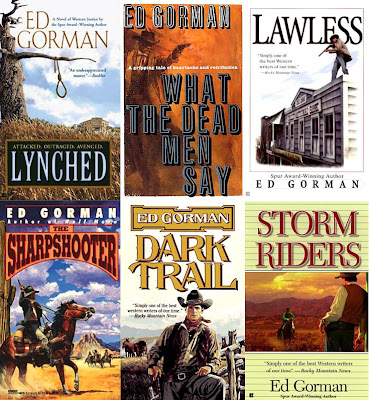 Do you write more than one book at a time?

Not really or not exactly anyway. I may write a chapter or two and start thinking of the plot for a forthcoming book—I’m doing that right now—but I prefer to stay “in” the book at hand. I need that intensity of focus.

Many of your westerns have strong mystery/crime elements, is this something you consciously plan or is this just the way you’ve developed as a writer?

The mystery element just developed. I wasn’t even aware of it. The crime element is conscious. I have an enormous book that contains something like 500 brief biographies of all types of criminals in the 1800s. East, west, south, midwest. While there were certainly crimes particular to the west (cattle rustling etc.) most of the criminality was the same as that in New Hampshire. 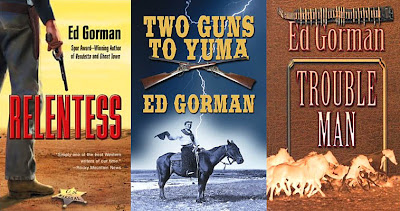 Do you find it as easy to write books in a series created by someone else, and that is multi-authored under a single pseudonym, as it is to write a series of you own?

All books are a struggle for me. I have a reputation for being prolific but as my friend James Reasoner says a professional does the best job he can with whatever project is at hand. I’ve spent just as much time with series books as I have with my own stand alones. It’s frustrating as hell but that’s just my process. The multi-authored series I’ve worked on didn’t require anything more than minimal consistency of character for the hero so in effect the books were stand-alones. That was a blessing. I worked on a suspense project once—only once--where the rules were so rigid it sapped all the pleasure out of doing the work. 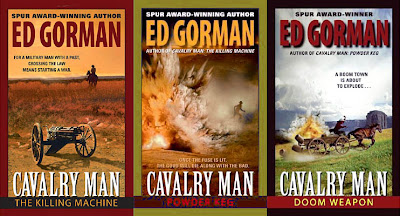 You’ve written a fair number of Trailsman books as Jon Sharpe, do you think the adult content of these, and similar series, is still a major selling point for these books and do you think these series would still sell well without it?

Well, look at the Gunsmith books by Bob Randisi. He’s written more than three hundred books in the series. Bob developed an approach that has now spanned three decades and is still going strong. He’s a great storyteller—really inventive--and his readers have never tired of his approach. 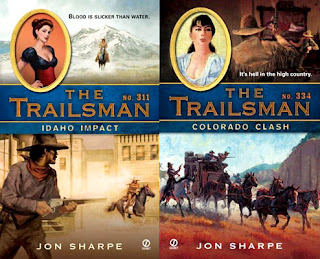 Well one that’s easy to come by right now is Guild, which Leisure just republished. The other one is Ghost Town which they’ll have to order from a used site online. Ghost Town and Wolf Moon are the westerns that pretty much achieved what I tried to do. 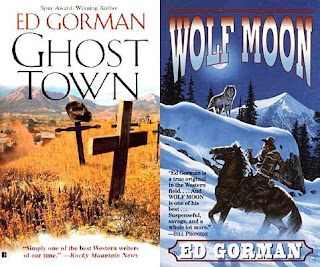 You’ve co-edited a number of anthologies, how did you decide which authors to ask to write for them?

There are so many good writers in all genres, so many writers I’m excited about reading, that it’s easy to make a list and start pounding on their doors.

Many anthologies include stories by Louis L’Amour, why is this?

Because he’s the only big name in western fiction. There’s Louis and there’s everybody else. At the time of his death he had something like 75% of all available rack space for westerns. 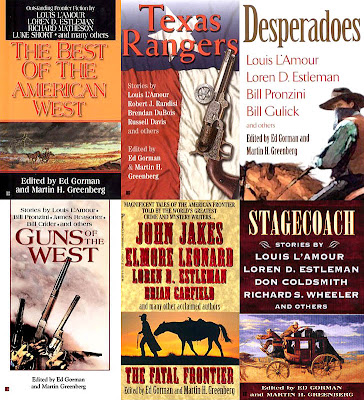 Do you think paper produced books will ever be replaced with electronic books?

I’m a Luddite but yes, I think some form of electronic reading will come to dominate the market some day. Technology will make it easy and simple. But I think there’ll always be books. Look at music. The industry figured out how to soak us with CDs—much cheaper to produce than vinyl and yet they charge much more than vinyl. But vinyl’s coming back. More and more new releases appearing now because music on vinyl sounds better. I can’t tell you why but my son—who prefers vinyl—sure can.

I'd have to say that right now the future looks bleak. Not because of the writers. There are more good western writers today than ever before. But it's the perception of the publishers that the field is played out in terms of major sales. To me that's true in this sense: Dashiell Hammett said that the private eye was really the cowboy hero brought into the city from the range. Now cops-especially violent ones-are the new cowboys because we're an urban society. There may be a way to reinvigorate sales of our field but I don't have a clue as to how to do it. 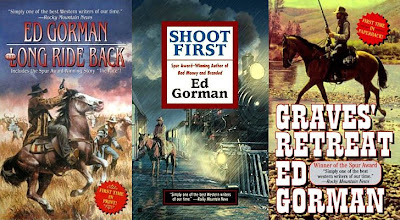 That depends on the day you ask me. Right now I’d say the westerns directed by Anthony Man, The Naked Spur in particular. I know I’ll get kicked out the church for saying this but I’ve never been much for John Ford. Too much Irish cornball for me, the exceptions being My Darling Clementine, The Man Who Shot Liberty Valence and of course The Searchers. I also like the Randolph Scott-Budd Boetticher movies very much. Burt Kennedy, who wrote the majority of them, really knew what he was doing.

Finally what do you read for pleasure?

Just about everything. On my night stand now I have The Collected Stories of Irwin Shaw, Tender is The Night by Scott Fitzgerald, The Goodbye Look by Ross Macdonald, The Listening Walls by Macdonald’s wife Margaret Millar, the horror stories of Robert E. Howard and two Gold Medal westerns from the Fifties by Marvin Albert. Plus I have four or five new comic books. So it’s a real hash, my reading habits. 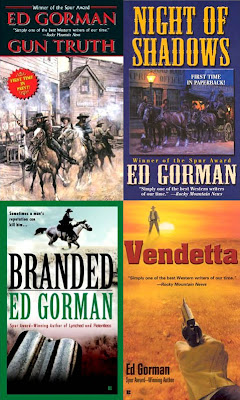 Hi Steve,
Thanks (and thanks to Ed, too). Another fine interview with a writer whose work I so admire. I just read "Lynched" and I can't say enough good about Ed Gorman's storytelling. If you haven't read any of his novels, dive in--you won't regret it.

Thanks for bringing us this, Steve (and thanks to Ed too, he's a very generous author IMO). I enjoyed your questions and Ed's answers greatly.

Ed is one of the finest writers I know, in any genre. Thanks for bringing us this interview, Steve. You're gonna have to collect all of these in a book one day. Who else are you planning?

That was a fine interview.

I haven't read too many of Ed's books, but this makes me want to pick up a few more.

Great interview! Really interested in that A Partnership With Death book now.

Terrific interview with one of my favorite writers. Thanks!

Thanks for this smart and insightful interview. Ed Gorman is a brilliant writer --one of the few who can cross genre lines with authority and style.

A great interview - made for great reading. Thanks.

No Irish cornball in Ed's work, at least that I've read. And also one of the best editors in any field...the BLACK LIZARD ANTHOLGY and its sequel alone would be enough, but there were all these memorable anthos highlighted here.

Glad you've all enjoyed this interview, I had great fun "chatting" with Ed, and putting it all together.

And to answer Bob R's question on who else am I planning to interview... I don't really have a list, when I'm ready to pick someone I look at my bookshelves, pick an author and see if I can track them down. The latter can be a stumbling block and I must help those who've helped with this.

Putting them in a book is an intriguing idea. :)

These are not the sort of things I say lightly: Ed Gorman is one of my favorite living writers; "The Face" is one of the best Civil War stories ever written. Just sayin'.

Good questions; great answers. Enjoyed reading of Ed's preference for Kennedy-Boetticher westerns. I'm also a lukewarm fan of John Ford. His, BTW, is a great blog to follow. More often than not, I read the online material he recommends. Thanks.