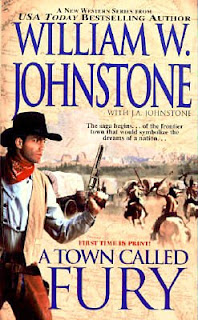 a William W. Johnstone novel
with J.A. Johnstone
Pinnacle, July 2006
The last thing Jason Fury wants is to lead a wagon train west to California but that’s what he finds himself doing. Halfway across Oklahoma the wagon train is attacked by bloodthirsty Comanche, and Jedediah Fury – the leader of the settlers, and Jason’s father – is counted amoung the dead. Later, in Arizona Territory, the squabbling settlers decide to stop for good and start a town they’ll name Fury in honour of Jedediah. It’s going to be a hardscrabble life and Jason knows he can’t just leave these defenceless pioneers to be slaughtered – amoung them a certain young lady he’d taken a real shine to…
This is the first book in a new series under the William W. Johnstone name. Overall it’s an entertaining enough story, a tale that revolves around a number of incidents – Indian attacks, river crossings etc – leading to the town of Fury being born.
J.A. Johnstone (a pseudonym I believe is being shared by a number of different authors, all unknown), tries to cram a lot into this book, such as introducing us to the many different characters that will, presumably, appear in the subsequent books too, and for me doesn’t spend enough time fleshing out any one character, although he has got me intrigued with a couple of them, enough to make me want to know more about them.
A lot of the action takes place rather quickly and the wagon train journey didn’t offer anything new to the seasoned western reader. What could have been a gripping part of the story, that of freeing the captives from the Comanche, just didn’t seem convincing to me and freeing them seemed all to easy.
Having said all that I will read the next in the series, hoping now that the many characters have been introduced, the author will be able to develop them more and spend more time on depth of plot, rather than having to squeeze so much into one book.
Posted by Steve M at 15:09

I liked this one when it came out and the subsequent books are better.

I've not read the next books yet, but I do intend to, and as you say they are better then that maybe sooner rather than later.

Just finished Hard Country, the second in the series. I missed the first one, so I'm grateful for your review. I agree with you that overall, the series isn't particularly gripping, but it does provide some light bed time reading!

I have all three Lyn, and as of yet haven't been moved to pick up the second book. The third one came out at the end of 07 so there maynot be anymore to come.