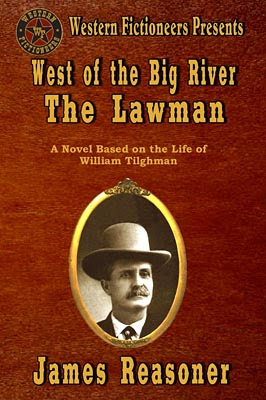 
William M. "Bill" Tilghman had one of the most illustrious careers of any Old West lawman, serving as sheriff, town marshal, and deputy United States marshal in some of the toughest places west of the Mississippi. But he faced perhaps his greatest and most dangerous challenge when he rode alone into the wild Oklahoma Territory settlement of Burnt Creek on the trail of a gang of rustlers and outlaws with some unexpected allies . . .

If you want a superbly written tale filled with plenty of twists and turns then you need look no further than this short novel by one of the top western writers working today.

Each of the books in the West of the Big River series uses a real person as the main character(s) and James Reasoner’s portrayal of Tilghman comes across as very believable, capturing his many admirable traits perfectly, as he also does with the lawman’s harder side.

The story is paced perfectly and filled with exciting action, such as the scene involving a fire which will have you wondering how Tilghman can possibly escape with his life.

This story is a fictional tale, but as James Reasoner comments, it is loosely based on true incidents. In the expert words of this author truth and fiction blend smoothly in an entertaining story that should be on the reading list of all western fans.

The West of the Big River series is published monthly, both as an ebook and paper book, and each is written by a different author. To date, the following titles are available:

Thanks for the review. I'll have to be sure to get a copy since I've enjoyed Reasoner's work and the stories I've already of Tilghman.
There are several good lawman figures from that era but Tilghman,Sam Steele and James Macleod probably top the list. One of the things that sets Tilghman apart is that, unlike many of the well known lawmen he made it into the start of what can be called the "modern" era. By the 1900s Macleod was gone and Steele was in the military.
Dave
www.dmmcgowan.blogspot.com