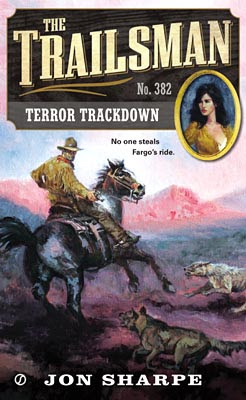 
Skye Fargo has learned the hard way not to depend on people too much. But he’s always been able to rely on his trusty Ovaro stallion. So when some lowdown bushwhacker makes off with the prized beast, he isn’t about to just let him get away. Soon the owlhoot will know that messing with the Trailsman’s horse has earned him a trip to hell….

Long-time readers of The Trailsman series will know that when Fargo gets mad then some savage retribution will be dealt out, and stealing the Ovaro sure leads to a brutal reckoning. And if you thought from the above blurb that dealing with the culprit would be the conclusion of the story then, like me, you’d be wrong.

There’s more to this fast moving tale than tracking down the person who stole the Ovaro. Someone has plans for the stallion – and many other horses too – and the author kept me guessing as to what that was. And once Fargo discovers just what this is his temper is on the boil again and he sets out to end this scheme, only to find himself facing an opponent backed by more hired guns then he can ever hope to take on alone…but when has that ever stopped the Trailsman?

Threatened with the death of the Ovaro Fargo finds himself forced to take part… nope, I can’t reveal that here as it’ll spoil the story for all those intending to read it.

So, once more, Jon Sharpe (in this case David Robbins writing behind that pseudonym) has written a gripping, action-packed, story filled with excellent descriptions and tough dialogue, that sees the darker side of Fargo come to the fore, resulting in a superbly entertaining read.

Thank you for the kind review.