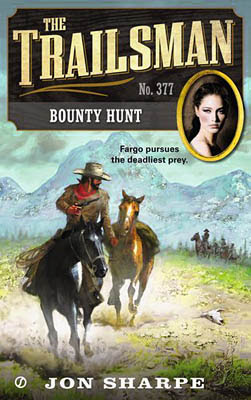 
Skye Fargo is in the Rocky Mountain town of Meridian, where he receives a most unusual offer. A woman wants Fargo to track down a local citizen who’s terrorizing the territory. The outlaw’s name? Cord Blasingame, and he just happens to be her husband. And while the Trailsman will be doing all the shooting, his beautiful client will be playing an even more perilous part – as bait for the brutal Blasingame!

This story pits Fargo against a man who just may be better at tracking and killing than the Trailsman, a half-breed who rides with Blasingame named Niyan, making for some tense confrontations between the two.

There are other great characters too, the lawman, Cripdin, who Fargo can’t respect, and the women, one of whom uses her sex appeal to lure the Trailsman into a position so she can kill him so she can protect Blasingame…..and this so called outlaw seems to be admired by many. This fact soon had me wondering as to which Blasingame was truly the victim or the aggressor? Was Fargo working for the correct side?

Jon Sharpe is a pseudonym, and the author writing behind that name this time around is David Robbins. One of the things I like about his writing is you can never be sure just who will be left alive at the end of his books and this one sure kept me guessing as to who that would be, if any, as the truth about certain characters is slowly revealed.

The story races along at an ever increasing pace, is filled with cracking dialogue and hard hitting action, one of the deaths near the end being particularly gruesome and graphically described. All this adds up to this being another great book in the Trailsman series.

Thank you for your kind comments. I try to make them as unpredictable as real life. Truth might well be stranger than fiction but we can come close. :)