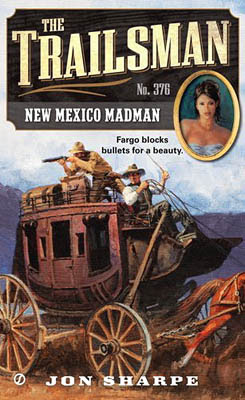 
Skye Fargo is playing bodyguard to “America’s Sweetheart,” stunning actress Kathleen Barton. She had the bad judgment to publicly and brutally spurn the attentions of notorious ‘Frisco power broker Zack Lomax, ruining his reputation and his livelihood. Now he wants revenge. And unless the Trailsman keeps both eyes peeled, Lomax is going to give his client a final curtain….

Most of this fast paced tale takes place on a stagecoach journey during which numerous attempts are made on Fargo’s life. Lomax wants to deal with Barton himself so reasons he needs the Trailsman out of the way first so he’ll have no opposition when facing the woman he so wants to kill.

The author of this book is the writer who has Fargo calling the Ovaro ‘Old Campaigner’ and ‘Old Warhorse’ and as usual teams Fargo up with a colourful sidekick, this time stage driver Booger McTeague, a man who provides many laughs throughout the story, in particular the voyeur scene.

There’s plenty of action, and this takes place quickly. The adult encounters are also dealt with in a few paragraphs. Even though the reader knows what is going on from the very beginning, the author keeps the identity of which of the stage passengers is really working for Lomax a secret until he’s ready to reveal who it is, thus giving the story a touch of mystery as Fargo and McTeague try to work out who this person is.

Jon Sharpe is a pseudonym, behind which two authors write at this moment in time, so I believe, and some people have said they find this particular author difficult to read at times and I must say he certainly has his own style. But that aside, he does come up with some great plots and tells them well and always leaves me looking forward to the next book in the series.