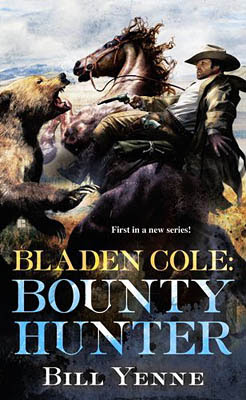 
Bladen Cole will be getting a handsome sum of money from Isham Ransdell, the owner of the Gallatin City Bank. It’s not a withdrawal, but a reward for the heads of the men who killed Ransdell’s associates. The banker wants the Porter boys back in Gallatin City dead or alive – preferably dead. As Cole sets out on his manhunt, he questions the motivation of his new client, the only rich man in Gallatin City somehow left unscathed…

His pursuit goes smoothly enough until he finds himself in the middle of a battle between two rival Blackfeet bands. Cole is forced to take sides, but luckily, this double duty leads him straight to the Porter boys, who are surprised to see a bounty hunter flanked by such an unusual posse. But Bladen Cole is in for a few surprises of his own…

This is the first book in a new western series and as far as I can tell the first western fiction from Bill Yenne.

Cole’s backstory is explained quickly and sufficiently in the prologue. The blurb above, taken from the back of the book, is covered in the first part of the story and then the complications set in as Bill Yenne tells his tale through various characters, Ransdell’s daughter, Hannah, being one of my favourites. I found it fascinating seeing her struggle to accept the truth about her father and then having the strength to act on this and see justice served.

Bill Yenne’s writing style is very readable and contains very little bad language and that that is does is very tame. Descriptions are good as is character development. Action scenes are gripping and one in particular makes for some very tense reading (Hannah being stalked by something in the night). Relationships are formed but don’t always work out as expected and there’s a neat plot twist near the end.

On finishing this book I felt that I had been thoroughly entertained and was left looking forward to the next book, The Fire of Greed that at the time of writing this review is to be published in November 2013.

With the Blackfeet being part of the story it must take place up here in God's country. Love books set in the mountain west.

Yes, that part of the action takes place generally between the place where the Marias empties into the Missouri and where the St. Mary River passes between two lakes of the same name. This is about 30 miles northeast (as the pileated woodpecker flies) from where I grew up, (not that they would be inclined to fly across the Divide, especially not this time of year). I hope that you will have a chance to read the book. I think you will like the Blackfeet part.