Longarm and the Ambush at Holy Defiance 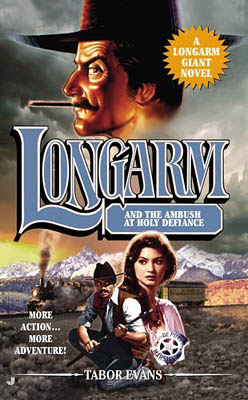 
After some Arizona Rangers and U.S. marshals are bushwhacked while looking for a stolen cache of gold, it’s Longarm’s turn to ride down to the border town of Holy Defiance to find the killers and the loot.

At his side is the heavenly Haven Delacroix, a pretty Pinkerton agent who is Longarm’s match in more ways than one. The Pinkerton’s always get their man – and Haven is no exception. As they tangle with banditos, Apaches, and a wealthy ranch owner and his wild wife, Longarm and Haven are in for a hell of a ride…

This is the twenty-ninth Longarm giant edition (the last one appeared in 2010) and in my opinion it’s great to see them making a return.

Tabor Evans matches Longarm with an engaging partner, one who has an air of mystery surrounding her, something that occupies Longarm’s mind almost as much as trying to figure out who killed the lawman and where the missing gold is hidden.

There’s plenty of action as Delacroix's beauty attracts trouble nearly everywhere they go. But it’s not just when Longarm is with the Pinkerton agent that he finds himself fighting for his life as he has to endure a savage beating and attempted drowning whilst tracking the outlaws alone.

Descriptions of landscapes are expertly written, painting vivid imagery within the mind. The violent elements of the story are brutal and fairly graphic. The whereabouts of the gold remains a secret until the author decides to reveal the truth about it. This also applies to why the lawmen were killed and to just what is going on around Holy Defiance.

The book opens with an exciting gunfight aboard a train and ends with an equally dramatic gunfight between outlaws and Longarm’s small, and unusual, posse.

The man writing behind the pseudonym of Tabor Evans this time around is Peter Brandvold and this story contains many of his trademarks, tough capable characters of both sexes, a fast moving plot, plenty of savage action and some neat twists.

Longarm and the Ambush at Holy Defiance is a must read for both fans of the series and the works of Peter Brandvold. If you’ve never tried either, and don’t mind adult westerns, then this could just be a great place to experience both and I’m sure it’ll have you coming back for more.

Sounds like a good one. I just finished doing some research on the Pinkerton's - quite a bunch.

I was hoping Brandvold would be doing the resurrected Longarm Giants. I'll have to pick this one up. Thanks for the info, Steve.