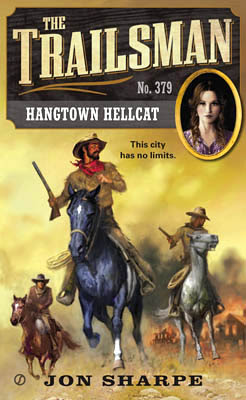 
In the remote ranges of Wyoming, Fargo and a work party setting up telegraph lines are bushwhacked, so Fargo takes a posse and gives chase. They end up tacking the killers to a hideout full of vicious men and one wild, wilful woman who runs the entire damned gulch known as Hangtown. And if a name like that has ever been earned, the Trailsman knows this is the time.

Full of excellent characters this story proves to be a fast moving, twisting tale of double-cross and brutality that will keep the reader guessing as to the outcome. One thing is for sure, when Fargo gets angry then the outlaws are certainly living on borrowed time, but it is how the Trailsman takes them out that makes for some spectacular scenes – one of which has been captured so well by the cover artist.

Like in most of his entries to the series this author teams Fargo up with a colourful sidekick, in this case a man called Buckshot and their banter often raises a grin. But it’s the woman who runs Hangtown that will remain in the memory for a long time – particularly her taste in sex, a method I can’t remember reading anything of the like in a Trailsman book before.

There’s plenty of action and a lot of dialogue and something Fargo reflects on – of never having killed a woman – caused me to frown in disbelief as this is simply not true. Strange that an author who has written so many Trailsman books would include such a statement. Still, I guess most readers won’t pick up on this, especially if they only read a Trailsman book every now and again and it certainly didn’t stop me enjoying the story.

Do you know who the ghostwriter is on this Trailsman book? I really like the ones written by David Robbins, a few others, not as much. Is there a list of who ghostwrites which books? Also the Ralph Compton series, some a great, others, not so much. Thanks.

And who Is the author, pray tell? Robbins again?

I have my suspicions but can't say for sure who wrote this one.

I've not come across a list of who wrote which Trailsman books although David Robbins does have a list of his available on his Yahoo message board.

As for the Ralph Compton books, the author is named on the cover and inside.

The author of this one is John Edward Ames.