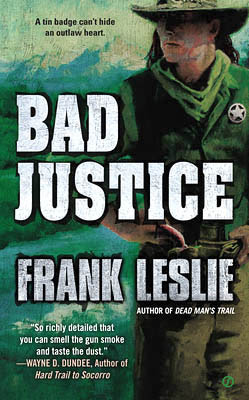 
Colter Farrow’s branded face is a constant reminder of why he’s been on the run for so long. But his plan to return home and confront his past backfires when he’s framed for the murder of two men. Men who happen to be U.S. deputy marshals.

Resigned to living on the lam, Colter heads to Utah Territory, where a desperate town marshal offers him a job as – of all things – a lawman. What better way for a man to hide from the law than to become part of it? Regardless of which side of the law he stands on, Colter makes enemies quickly. But Colter doesn’t plan on letting them stay above ground for long….

The fourth book in the Colter Farrow series is as hard hitting as the previous three. If you’ve read the earlier books you’ll definitely want to read this for Colter confronts the man who branded him, the conclusion of which sets up the rest of the story.

Full of brutal, savage action that sees Colter beginning to accept his fate to be a wanted man for the rest of his life. But can his new job as a lawman offer a way out? Frank Leslie builds up hope for Colter but then adds a complication as it seems someone knows Colter’s true identity (he uses a pseudonym for much of the story). Leslie expertly weaves a tale of twists and turns that will make the reader wonder how things will end and just what these surprises will mean for Colter’s future.

Once again Frank Leslie (Peter Brandvold) has written a story that grips from the opening words, paints vivid imagery that captures the imagination and refuses to let go. This book truly is a page-turner. Let’s hope it’s not too long before Colter Farrow rides into his next adventure.

A decent story but the editor missed some glaring inconsistencies.

On p. 81, for example, "Colter had found a pair of handcuffs in Dunbar's saddle-bags, and he'd cuffed the kid's [Billy's] hands behind his back."

But on p. 82, when Dunbar shoots Billy's ear off, "Billy screamed and clapped a hand to his left ear."

You try holding your hands behind your back and clapping a hand to your left ear.

By p. 87, "She turned to Billy sullenly sitting his zebra dun with his hands cuffed behind him."