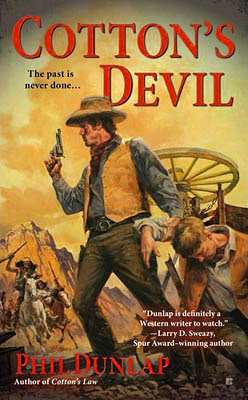 
When Sheriff Cotton Burke finds Thorn McCann nearly dead from a gunshot wound, he has no choice but to become entangled in the affairs of the nefarious bounty hunter. While McCann is one of the last people Cotton wants to hang around with, someone else from his past is about to burst into his life…

Cotton isn’t proud of the men he’s killed, but he sleeps well at night knowing that he did what was necessary to preserve justice. Judge Arthur Sanborn, the father of one of those men, seems to disagree, and he’s out for blood – specifically, Cotton’s. Thanks to one of Thorn’s shady associates from his past, Cotton discovers some very valuable information about Sanborn, and now, Cotton must enlist the help of Deputy Memphis Jack Stump in order to save not only his own life but also the lives of everyone close to him…

Cotton’s Devil is the third in the Sheriff Cotton Burke series and the story starts moments after the close of the previous book, Cotton’s Law, but you don’t have to have read that book to fully enjoy this one as Phil Dunlap includes just enough information to explain just what lead up to the troubles this tale follows.

The relationships between certain characters are built upon as you’d expect, some strengthening and others heading for rocky ground. Even Burke isn’t safe from the latter as secrets from the past threaten to bring an end to the happiness he’s found with Emily.

Phil Dunlap switches regularly between his characters, chapter by chapter, scene by scene, so the reader can follow all their trails as traps are set and madness takes hold. As the killers gather you will find yourself wondering how Cotton can emerge victorious.

Phil Dunlap steers his story well to its tense climax that seems to resolve all the storylines but then it becomes clear he’s left one story thread dangling, closing the tale with the perfect hook to ensure you and I will be buying the next book in the series.

Another for the tbr pile :)