A Bullet for Sartain 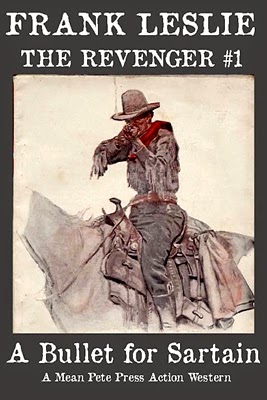 
Mike Sartain, the Revenger is lured into a trap baited with two names from his New Orleans past. When his best friend is killed, the Revenger straps on his LeMat and rides for his own white-hot brand of revenge...

The author behind the pseudonym of Frank Leslie for the first book in this brand new action packed series is Peter Brandvold. Like much of his previous work this story has the gritty and savage feel of a spaghetti western and is filled with memorable characters, not least Mike Sartain. Peter often includes strong female roles, women who can more than match the male leads in ability with weapons and courage; in this case that woman is Marshal Claudia Morales.

There are questions right from the start that easily hook the reader and make this an impossible to put down read. Gunplay is fast and furious and is brutally graphic. The book also contains descriptive sexual scenes. The pace of the story never lets up and the reason behind the attempts on Sartain’s life came as a complete surprise to me and will surely add to the emotional scars The Revenger already carries.

On the strength of this book I hope this series has a long run and I'm already eagerly looking forward to the next one which should be out soon.

I'm in the midst of this one, Steve, and it's a helluva rip-snorting read. I hope we see lots more entries in this series from Drago/Brandvold!

Great review for a great book,i enjoyed it very much. Hope to see many more of these come down the pike.