Slocum and the High-Rails Heiress 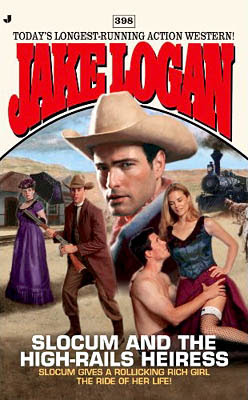 
Slocum’s at the end of his tether when a stranger offers him a hot meal, a job escorting precious cargo to Salt Lake City, and a thousand dollar advance. It may be too good to be true, but it’s also too good to turn down – especially when he gets a look at the cargo…

In his care is a mysterious chest, the key to which rests on another chest – that of Augusta Barr, a stunning heiress with more than a little mystery of her own. Pursued by a deadly pair of redheaded roughnecks, Slocum finds himself caught in a deadly mix of beauty, bounty, and bullets.

This book is the first by a new author to the Slocum stable, but it’s not his first western, his other books have gained him wide acclaim and saw one of his short stories nominated for a Western Writers of America Spur Award. The man writing as Jake Logan this time around is Matthew P. Mayo.

The characters that this story revolves around are all superbly crafted, such as the redheaded brothers, Augusta Barr and her oriental cook, but the best, for me, is the veiled woman; just who is she and what is she after? Her true identity coming as an excellent surprise that I didn’t guess was coming.

Most of the story takes place on a train. Dialogue and descriptive scenes are handled extremely well. Action comes thick and fast and often painted very visual images within my mind. There’s plenty of mystery that grabbed my attention and refused to let me go until the answers had been found, such as the already mentioned identity of the veiled woman, along with the air of suspicion placed around Augusta Barr and the truth as to the content of the chest.

Slocum and the High-Rails Heiress is a well-paced book that provided a thoroughly enjoyable read, leaving me looking forward to Matthew P. Mayo’s next entry into the series.