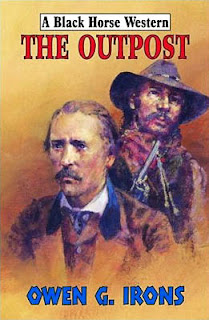 as by Owen G. Irons
A Black Horse Western from Hale, June 2009
Cameron Black figured he was due for some luck. With a posse on his trail and the desert crawling with hostile Indians he finally managed to make it to the isolated army outpost. The trouble was the post was manned only by a skeleton crew of weary soldiers, among them three would-be deserters waiting for a chance to steal the army payroll. Also trapped inside by circumstances were a US marshal and his young prisoner and a group of female camp-followers. Among them was Cameron’s old-time lover. Even with the Comanches gearing up to attack the outpost, Cameron felt like making a dash across the desert, because there was nothing here but certain trouble.

Owen G. Irons brings together a great mixture of people, some of whom are at conflict with each other, but all sharing that need to survive – and some will do this at the expense of their companions lives. Old friendships are rekindled, whilst others begin new relationships. But can any live through the ever-growing menace of the gathering Comanches?

Lieutenant Young, the soldier left in charge of the outpost, has more to worry about than just the Comanches. His young wife is in desperate need of medical attention as she fights to live through a breech birth. This threat to her life, and the child within her, makes for some tense scenes, which strain the relationship between the Lieutenant and Black.

As you’ve probably gathered the book is character driven and Irons (real name Paul Lederer) well-crafted prose soon has you caring about them, even some of the “bad” guys – after all the books hero, Black, is an outlaw.

The book is very easy to read, the plot moving along at great speed, and even though the end is pretty much as expected, I liked how Black and Virginia’s future together is left under a slight question mark. All in all a gripping and exciting read.

Owen G. Irons is fast becoming one of my favourite BHW writers.

The Outpost has a publication date of June 30th, but is available now, and I’d suggest getting your order in as soon as possible before it sells out.
Posted by Steve M at 11:58

Paul Lederer will be contributing his thoughts on "The Passing of the Classic Western" in the next edition of Black Horse Extra (link in Steve's sidebar), which is scheduled to go online mid-August. But Paul warns, "I do not do bios, interviews or promos. That's a pretty hard and fast rule with me."

It's good to see Steve reviewing new BHWs regularly since the supply of them was set up last year with former Hale publicity officer Helen Ogden.

The present publicity assistant, Nikki Edwards, kindly put me on Paul's trail with his mailing address.

Looking forward to reading what PL has to say on BHE next issue. Shame he wont do interviews.

Thanks again for helping set up the supply of books from Hale, Keith.

Looks like Hale are increasing their western output from 6 to 7 books a month starting in November.

The info I have is that the seven a month begins in July, Steve. I know I gave Gary the details for the Tainted Archive a couple of months back. I have the seven for July included in my current quarterly list at the Extra. You'll find 19 titles there instead of 18.

I just got my info from Amazon's listings (America), they didn't have any for earlier months - at least in the list I was looking at.

I look at America's Amazon because finding westerns through the UK version seems to have gone to pot at the moment, it doesn't bring up any Trailsmans, Longarms etc.