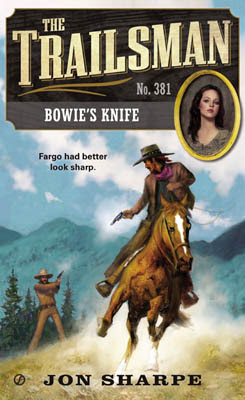 
There’s no one who hasn’t heard of Jim Bowie and his legendary knife. And Skye Fargo’s been hired to guide a brother and sister to the border to purchase the actual pig sticker handled by Bowie himself. But there are others after the blade. And the Trailsman will have to be a cut above the competition if anyone’s going to survive.

So just how much is Bowie’s knife worth in dollars and lives? Seems like Fargo will find out if the knife is authentic…but how do you prove this? And who is behind the attempts on the Caventry’s lives? Plenty of questions to grab hold of the reader’s curiosity, ensuring that this book is a very hard to put down read.

The owner of Bowie’s knife proves to be a worthy adversary in negotiations and has some strange tastes in life’s luxuries, and with a nickname of ‘The Throat Slitter’ you just know The Trailsman is going to be in deep trouble very soon.

The book is told in short chapters that mostly have cliff-hanger endings that urge you to keep reading. Filled with savage action and desperate characters that will stop at nothing to get what they want, and sharp dialogue that is often laced with humour that counterbalances the more brutal aspects of the tale, this is another Trailsman book that highlights why I keep reading this series every month.

If you are a fan of the Trailsman series, David Robbins’ work (for it is he writing behind the pseudonym of Jon Sharpe this time around) or just superbly told westerns then make sure you don’t miss this.

Thank you for your kind review. I thought it would make for a good read to have him go up against a whole new kind of 'predator'.
:)
David