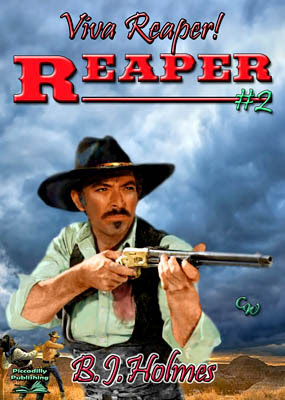 
The normal run of things was for bounty hunter Jonathan Grimm to do the chasing, but when he found it was his turn to get out of town, the trail stretched all the way to Mexico.

When he rode in, saddle-sore and stuck with the problem of trying to nail a hard case with no face, the small border town beyond the Rio Grande already seethed with tension. Framing him for murder just set the scene for more shooting.

Only one thing was for sure; where he went, death followed. That’s why they called him the Reaper.

Originally published in 1996 this is chronologically the second Reaper tale, and certain events from the first book, Comes the Reaper, still trouble Grimm and pose a threat to his life – you don’t need to have read that first story though as B.J. Holmes includes just enough information in this one to explain events leading to this.

Grimm’s determination to make some money out of bounty hunting seems to be thwarted at every turn, yes he gets his man but then things turn against him and his expected payday just doesn’t happen the way it should. This is why Grimm finds himself hunting a faceless man.

There’s plenty of action as Grimm finds himself framed for murder, double-crossed and involved in an assassination attempt. It also seems none of the people he deals with can be trusted. All this will have you wondering if Grimm will make any money out of this quest or even escape with his life.

After finishing this I found myself hoping it won’t be too long before Piccadilly Publishing makes the next Reaper book available.