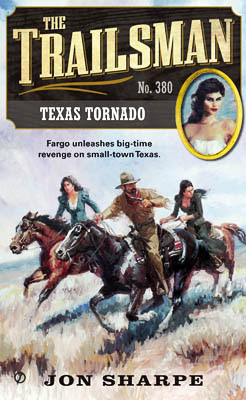 
Fargo’s decision to break a beautiful young woman out of jail lands him behind bars as well – and in the crosshairs of a deadly marshal and a crooked mayor, who’s acting as the judge and jury. Faced with the prospect of serving years doing hard labor, Fargo leads a prison break. But soon he’s on his way back into town after Alice Thorn, a former prisoner with revenge on her mind and his Henry rifle in her hands. To get his rifle back, Fargo is going to have to walk smack-dab into the middle of her murderous revenge – and leave a few dead bodies in his wake.

This book sees Fargo pitted against a man who just may be faster with his guns than the Trailsman himself. Alice Thorn is another character that will stick in the mind for a long time, an innocent, almost frail, looking girl who is a vicious and deadly problem that could prove to be the death of the Trailsman.

Alice isn’t the only great female in this fast moving tale, Gwendolyn Stoddard is memorable too, her high-and-mighty ways bringing their own problems that could also lead to the Trailsman’s end.

Fargo’s smart, sarcastic comments that provide many laughs for the reader, could also be his undoing, as even as he knows he should keep his mouth shut he just can’t help himself and it could just be he’s making the wrong man mad this time.

The story builds at a terrific pace and Fargo’s frustration and anger rises along with it and you just know when he reaches boiling point that quick-fire killing is going to be the result and Jon Sharpe (this time David Robbins writing behind that pseudonym) has a superb surprise waiting in how one of the main characters dies and an unforeseen revelation during this beautifully written scene that adds a great twist to the tale.

Thank you for your review. I was hopeful that a certain twist would touch readers, and evidently it did. :)