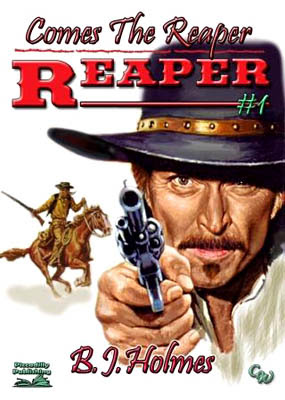 
When Tom Connor first disembarked at Puget Sound, eager to settle in the northwest with his bride, little did he know that he was to take a long, long journey. This is a saga of violence, death and revenge that bears witness to the emergence of the bounty hunter known to history as ‘The Reaper’.

Way back in 1983 the first book to feature Jonathan Grimm, The Reaper, was published. Originally intended as a stand-alone novel the character proved popular and B.J. Holmes wrote another, and then another, until seven books made up the series. The fact that there was never any intention of producing a series the books move back and forward in time as Holmes filled in gaps in the bounty hunter’s backstory. Now, thanks to Piccadilly Publishing, the books are being published as ebooks in chronological order of The Reaper’s life, thus explaining the Foreword that states other Reaper books have already been published. This book was first published in 1995.

B.J. Holmes has always been a favourite western writer of mine and many of his books can be found in my collection. Comes the Reaper was one I’d never managed to find at a sensible price in good condition so I was extremely pleased to see Piccadilly Publishing put it out as an ebook.

As expected, the story is well crafted, very fast moving and filled with excellent descriptions and dialogue. There’s plenty of action and some neat twists and turns that see Tom Conner’s re-birth as Jonathan Grimm. It seems that any attempts he made for a happy, normal, life were doomed to failure and tragic circumstances see him taking up the vengeance trail in the battlefields of the American Civil War.

After surviving the horrors of war Connor finds himself working for a very important man and is then hunted for playing a part in that man’s murder. This part of the book making for some suspenseful reading.

I can’t really say much more without spoiling the story other than adding that I’m sure whoever reads this book will find themselves, like me, looking forward to the next Reaper book being published and hoping that we don’t have to wait too long for that to happen.

This looks like an interesting series! I just got into westerns myself and recently started reading Johnstone's "Last Mountain Man" series.

Someone recommended the "Longarm" series to me, and I've read a few. I'm also interested in reading the series' that have spun off/had characters featured in the Longarm Series.Thus far, I know of "Easy Company", "Lone Star", "Doc and Raider", "Raider", and (more recently) John Fury from the 90's "Fury" series. Are there any more series' that have crossed overwith Longarm?