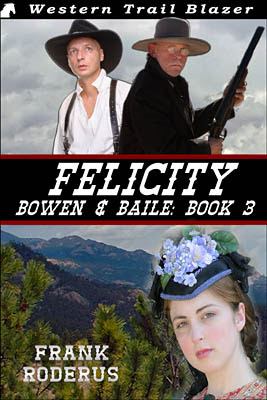 
Jonathon Two Hawk has disappeared and his wife – or widow – wants Cole Bowen and Edward Baile to investigate. What she really wants, and says so, is for Bowen and Baile to kill the man she believes has murdered her husband and stolen more than seventeen thousand dollars from him.

The partners are not assassins. But if someone tries to murder them, it will happen at that party's peril.

Like the previous stories in this series Frank Roderus presents the reader with a very fast moving tale filled with incident and surprises. The dialogue between Bowen and Baile is often laced with humour. The changing West also sees Bowen filled with wonder such as taking a ride in a lift and having cold and hot water piped into the bathroom of his hotel.

No matter how much Bowen doesn’t want to kill you just know it’s going to happen at some point and when the gun action comes it’s fast and furious, both Bowen’s old Colt and Baile’s much more modern Mauser being used swiftly and with deadly effect.

After finishing this I was left feeling thoroughly entertained and looking forward to Bowen and Baile’s next adventure.