Confessions of a Gunfighter 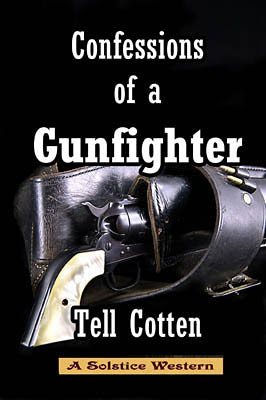 
Texas, 1871. This is the first person tale of Rondo Landon, gunfighter. His Pa gave him the ivory-handled Colt and Ben Kinrich taught him how to use it.

Rondo is a troubled gunfighter with quite a past. Recognized by his six-gun, he is known for robbing banks, stagecoaches, payrolls, and for rustling cows. Now, locked in a jail, it looks like Rondo will be facing a long prison term, or worse. But, before that happens, he has a few stories to set straight.

At first this story seems to be a series of unrelated incidents as Rondo loses his home, then his family and begins to roam aimlessly until a chance meeting with Kinrich leads to him becoming a notorious outlaw. But it isn’t long before Rondo sickens of the killing of innocents and tries to forge a new life, and it’s during this time that his paths cross again and again with people from his past often resulting in pain and death that further mould Rondo’s personality.

Tell Cotten writes an easy to read and fast moving story full of terrific characters and exciting action. I enjoyed seeing how Rondo went from being a lost youngster into a confident gunfighter, and witnessing his efforts to control his rage and struggle with the choices life throws into his path, such as turning himself in for his crimes even though this could mean facing a hangman’s rope.

As the story races towards its climax Rondo will face his demons and have to make a tough decision about the daughter of the rancher he works for.

This story should be enjoyed by all western readers (there’s isn’t any graphic sex or violence), and I have no hesitation in recommending it.

Confessions of a Gunfighter is available as both a paper book and an ebook.

Those who have already read this book may like to know that book 2 in the Landon saga, Entwined Paths, has just been released.

I read this book,Mr. Cotten,and enjoyed it very much. I must share it with my 15 year old grandson when he cones to visit!

Haven't read any of Tell Cotton's stories; appears that I'll have to do that soon!
Has he read any of mine?
Dave
www.dmmcgowan.blogspot.com

Tell Cotton proves that you can have strong character development in an action packed story. Cotton provides tension and action along with people that you really care about.

Thank you Jackie, that means a lot to me!

I checked out your books, D.M., and they look interesting! I'll be sure to pick one up!

Thanks James! I have read your books, and the same thing could be said for your books!