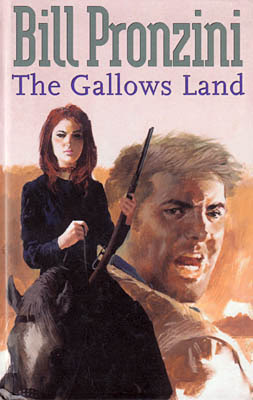 Roy Boone wanders aimlessly in the arid Southwest, a life with no meaning since the death of his wife. He is desperate for water, and stops at a ranch where Jennifer Todd gives him food and drink. Seeing this pretty young woman with her battered and bruised face, Roy is concerned for her welfare. That night, he finds Jennifer’s husband dead and he believes that she killed him. Then Roy is attacked by someone hiding in the shadows, and shortly after he is shot at by strangers. He has a lot to fret about, not least Jennifer – who has by now gone missing.

Bill Pronzini really grabs the reader’s attention in the early part of this book as question piles upon question. Just what is going on? Who are all these people Roy Boone unwittingly finds himself tangled with? What has happened to Jennifer? And so it goes on; puzzle after puzzle that hook the reader with their twists and turns.

The book is written in the first person so further developments are just as surprising to the reader as they are to Roy Boone. The story is told at a fast pace, although I did feel its momentum sagged a little as it moved into the second half before picking up speed again for its exciting final fight that sees one of the characters meet a particularly gruesome death.

This book has been put out by a number of different publishers and this version adds some author information at the back. Here we discover that this book has the same beginning as a (short?) story written by Bill Pronzini called Decision.

Overall I found The Gallows Land to be an entertaining read that will certainly have me keeping an eye-out for Bill Pronzini’s other westerns.
Posted by Steve M at 15:43