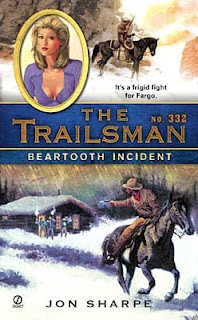 BEARTOOTH INCIDENT
as by Jon Sharpe
Signet, June 2009
In the frozen Beartooth Range, Fargo finds himself without his mount, his Colt, or any chance for survival – until he’s rescued by a kindly wilderness woman named Mary Harper and her children. And he’ll get his chance to pay them back, because brutal Cud Sten and his gang want what the Harpers have. But the snowbound sidewinders don’t expect to get what the Trailsman is going to give them.

As expected from a Trailsman book this is a fast, action packed, read, which begins with Fargo finding himself close to death in the snowbound Beartooth Mountains. If that is problem enough he’s set upon by a pair of hungry wolves, this part of the book making for a nail-biting bloody scene that makes you wonder how Fargo can possibly survive, and is one of the best man v wolf confrontations I’ve read for a long time.

Cud Sten and his men, especially Rika, make for some wonderfully vicious adversaries for Fargo. Sten’s choice of weapon provides some of the more brutal moments of the story.

The more savage scenes are counterbalanced by humour, often provided by Mary Harper’s children. But it is Mary herself that David Robbins (writing as Jon Sharpe) uses to reveal a side of Fargo not often shown. After Fargo nearly dies in the snow he begins to think about his life, in particular the women he’s met and whether he could ever contemplate settling down, perhaps getting married. When Mary hints – none to subtly – that she’d be happy to share the rest of her life with Fargo, David Robbins delves a little more deeply into just what it is that makes The Trailsman the man he is.

Beartooth Incident provides all the action any fan of this series would expect and is a well told and gripping read, and this time offers that little bit more by exploring some of the passions that drive the Trailsman.
Posted by Steve M at 09:16

It's great to know someone is looking after this stuff.
Thanks, Steve.
I have a new book out (Homesteader:Finding Sharon)and will send you a copy as soon as I have some.
There's a short excerpt from it on my blog.
Dave
www.dmmcgowan.blogspot.com

Look forward to getting it Dave.