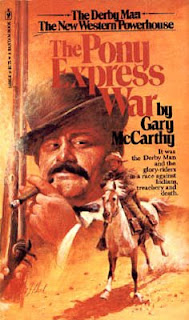 THE PONY EXPRESS WAR
by Gary McCarthy
Bantam, August 1980
Look sharp, hit hard – that’s the Derby Man’s style. He’s a fast-moving mountain of muscle who throws himself into the thick of the West’s greatest adventures – like the Pony Express, a gruelling 2,000 mile race through hell. The pace and terrain are deadly enough but vengeful Paiute warriors and murdering saboteurs led by a sadistic giant threaten to turn the route into a trail of blood. Until one man has the brains and brawn and guts to save the Pony Express – the Derby Man.

Gary McCarthy once more involves his hero, Darby Buckingham, in events that helped shaped the West and became part of America’s history. At the urging of his publisher Darby finds himself witnessing, and becoming involved with, the formation of the Pony Express.

Many real-life people fill the pages of this exciting and fascinating story, such as the men who set up the Pony Express and those who rode for them. Not only are there the problems with setting up such a grand scheme but there are other obstacles to overcome, such as the fury of nature and that of the Indians, whose land they must cross, plus the men who want to see the venture fail for their own personal gains.

It’s a tale full of frustrations, bravery and ambition. A story told through the eyes of Buckingham who has his own problems to solve, such as his on-going relationship with Dolly Beavers – which provides some excellent battles of wits and laugh-out-loud moments.

There are many memorable moments in this book, such as the well written historical and courageous rides of Warren Upson and Pony Bob Haslam.

For me Gary McCarthy has managed to combine both fiction and truth in a gripping read that teaches the story of the Pony Express without the reader feeling he is part of a history lesson. This book has definitely left me eager to read more of the Derby Man’s adventures.
Posted by Steve M at 16:34

The Derby Man was my one of my all-time favorite series. All the western tropes but seen from a different angle and enlivened with wry humor. Great books.

I've only read the one book in this series but am always on the lookout for more.

Definately up there as one of my favourite western series too, Ed.

Gary, I'm sure you'll find some of them soon.