Mark Bannerman is the pseudonym used by Tony Lewing. With around twenty books to his name, Tony has found himself unable to produce any new work for sometime, but has agreed to talk to Western Fiction Review, thank-you Tony. 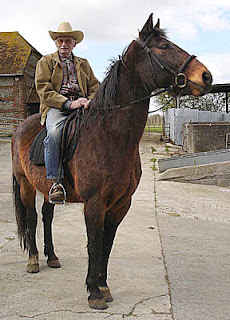 I loved writing essays at school, turning most of them into stories. Later on, I took a correspondence course on being a writer and thereafter it became a hobby that incorporated my interest in the American West. I have accumulated a considerable library of reference books about the old frontier and writing in general.

The first book I had published was a Western called Grand Valley Feud, a tale of conflict between cattlemen and sheepherders. I originally wrote this in 1959 but it was too long for Hale. In 1995 I shortened it and resubmitted. This time it was accepted. Thereafter, when I retired from the Army, I wrote full time. 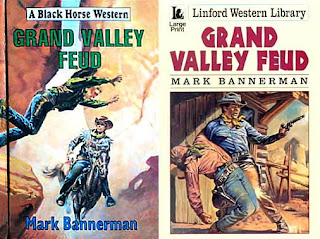 Being an Englishman, why did you choose to write westerns instead of any other genre?

I owe my interest in the American West to my grandfather who, when I was a child, took me to see countless cowboy films. I became an avid fan of Hopalong Cassidy, the Lone Ranger & Tonto, Roy Rogers, Gene Autry, Buck Jones and so on. My grandfather read nothing else but Western books and his enthusiasm for the genre rubbed off on me. More recently I have visited Western America on several occasions. I have ridden the Western trails, visited old Indian strongholds and Army forts, battle sites, ranches and museums. In researching Ride into Destiny, I explored the site of Fort Phil Kearny, walked the trail of Fetterman’s debacle and followed the route taken by John Portugee Phillips as he set forth to carry word of the tragedy to the outside world. I have paid homage at the graves of Fetterman, Red Cloud and Captain Jack. 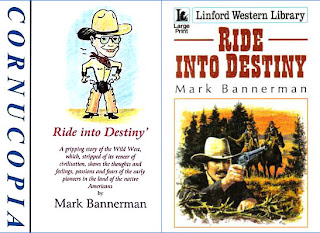 Which writers influenced you?

In 1951 I read Will Henry’s No Survivors, a brilliant book about Custer, Crazy Horse and Fetterman, and this proved a profound influence. I loved the first person narrative and blend of history and fiction and determined to try my hand in a similar vein, starting with short stories.

Which past western would you like to see back in print and why is this?

The Earthbreakers by Ernest Haycox – a wonderful book about the early settlers in Oregon, full of characters and the quirks of human nature. 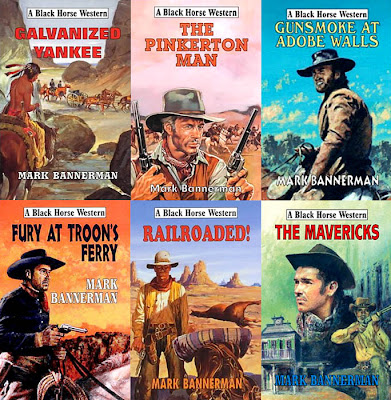 How long did it take you to write a Black Horse Western, and how did you go about it?

Each book takes about eight weeks to write. I like my heroes or heroines to be up to their ears in trouble within the first chapter and thereafter to have the greatest of difficulty in sorting things out, ending in a climax that is not always predictable.

Are all your westerns stand-alone titles or do any of them form a series?

All my novels are stand-alone. My central characters face so much danger that I doubt they could survive a second outing.

You wrote a book called Bender’s Boot, which I enjoyed very much, based on a real killer family. Do any of your other books use real people/events as the main theme of the plot?

Yes.
Frank Riddle – Frontiersman and the large print version The Frontiersman are both reconstructions of the Modoc Indian War 1872-73 with all its real-life characters, and is written through the eyes of interpreter Frank Riddle. I was fortunate enough to travel to the Lava Beds, Northern California, to do my research. I soaked up the atmosphere of the various battle grounds, interviewed Indians and historians and stood at the spot where General Canby was murdered. Many of my other books touch on historical events and people, or are suggested by actual incidents. The Beckoning Noose (the Modoc War), Escape to Purgatory (the meeting between Billy the Kid and Governor Lew Wallace), The Early Lynching (mail order brides), Renegade Rose (the Oregon Trail), Man Without a Yesterday (Custer’s expedition in the Black Hills), Trail to Redemption (Civil War, buffalo hunters etc) Comanchero Rendezvous (post Civil War activities on the Staked Plains of Texas), The Pinkerton Man (Pinkerton Detective Agency), Galvanized Yankee (the battle of Shiloh and the Wagon Box Fight), Railroaded (the building of railroads), Lust to Kill (vigilantes), Blind Trail (Geronimo and the Apache Wars), Gunsmoke at Adobe Walls (The Comanche Wars), The Modoc Kid (Alcatraz), The Mavericks (illegal branding of Texas cattle) and Ride into Destiny (the Fetterman Massacre). 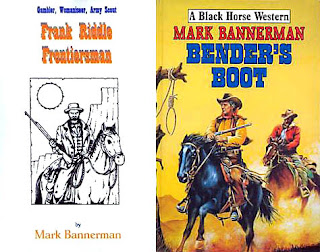 Comanchero Rendezvous, Blind Trail, The Modoc Kid, Bender’s Boot and Gunsmoke at Adobe Walls. I particularly enjoyed writing these as I did when creating my humorous Western Hog Tied Hero. 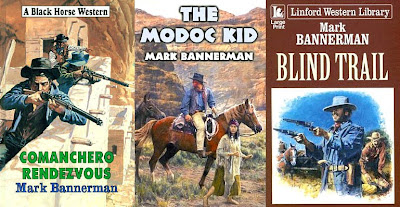 You’ve written a few other books with such titles as Short Story World (a how to book), Ride into Destiny, Frank Riddle: Frontiersman, and Under Western Skies, please tell us a little about them.

I have had hundreds of short stories published on many different themes and I tried to pass on my experiences and techniques in Short Story World. Under Western Skies is an anthology of my early Western short stories which were mostly published in International Storyteller. Cornish Woman is a non-western and has proved my most successful book to date. Also published have been two anthologies of non-western short stories. I’ve discussed Ride into Destiny and Frank Riddle above. 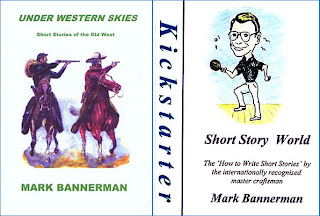 Do you think paper produced books will ever be replaced with electronic books?

I think the appeal of paper-produced books will always remain. The attraction of a good cover and the general feel of a well-bound book will not diminish.

Dances with Wolves is my all-time favourite as it portrayed Native Americans in a very authentic light. Another Kevin Costner film Wyatt Earp was also very good. 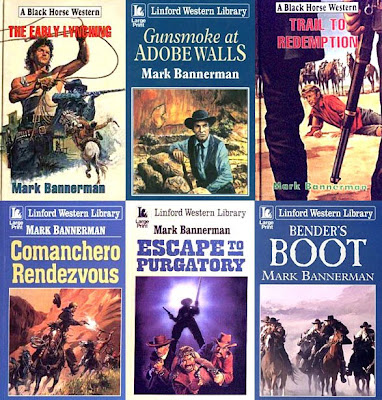 What do you read for pleasure?

I’ve read countless Westerns, fiction and non-fiction, and my other recent enjoyable reads have been The Poisonwood Bible by Barbara Kingsolver, Alias Grace by Margaret Attwood and Star of the Sea by Joseph O’Connor. Also Birdsong by Sebastian Faulks and The Forgotten Soldier by Guy Sajer.

Finally Tony, you've always been a good Western writer, your fans miss you, is there any chance Mark Bannerman will make a comeback?

Health problems have prevented me from writing recently, but I hope to regain my writing enthusiasm in the not too distant future. 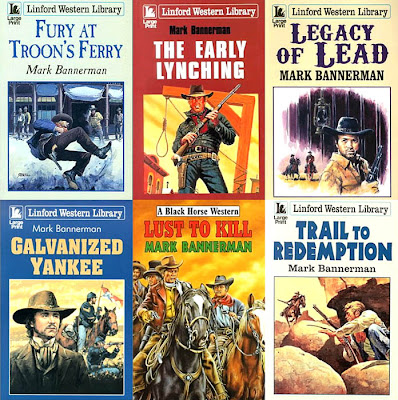 Thanks for the interview and best wishes to Tony for the future. I'm sure many of us are hoping he can get writing again soon. I've thoroughly enjoyed every MB title I've read and I'd strongly recommend them to anyone. They always feature intriguing plots along with sophisticated variations such as first person narratives, framing stories etc that make them excellent fiction.

It's always great to see interviews from fellow BHW writers - what struck me is of how many of us were introduced to the genre by older relatives. I have told a similar story about my grandfather. I'll have to find some grandchildren somewhere and pass the love on myself.

Please convey to Tony Lewing my regret that his writing has been curtailed. I hope that will be an entirely temporary problem and that he will soon be at work again.

I really hope that you can find the inspiration to deliver another book to your awaiting fans.
It was you that kindled my interest in writing and reading stories, so keep trying and don't give up.

Love from your Grandson,
Jordan