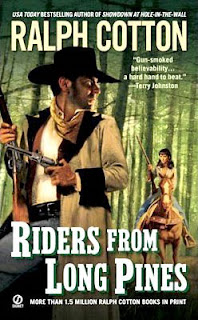 
When some drovers stumble upon the bloody aftermath of a stagecoach robbery, they discover a hidden cache of money that belongs to the most powerful man in the county. Briefly tempted to fill their saddlebags and run, they decide to do the right thing and return the cash. But that task may not be as easy as it sounds.

Buckshot Parks, the outlaw responsible for the robbery, is dead set on getting back his money, and he has a stolen badge to hide behind while he tracks the “thieves.” But there’s a real lawman on Buckshot’s trail – Arizona Ranger Sam Burrack. With his shotgun-toting partner, Maria, he’s determined to catch the outlaw and get to the drovers before they meet with serious harm for doing good.

Ralph Cotton once more creates a set of believable characters in a very fast moving story. The hold-up of the stagecoach, that sets events in motion, is extremely well told and with the discovery of the hidden money he soon had me wondering how the drovers could return the cash without being accused of being the robbers themselves. In fact it’s this worry that causes most of the problems for the drovers.

Ralph Cotton tells the story in easy to read prose and often switches from one set of characters to another, in fact it’s probably the drovers who take centre-stage in this story, rather than Sam Burrack. Buckshot Parks makes for a superb outlaw but he isn’t the only one tracking down the drovers, there’s also Grissin – the man who claims the missing money is his - and his posse.

As the story unfolds it becomes clear that trying to do “the right thing” can get you in as much trouble as being on the wrong side of the law.

The plot is pretty much a straight forward chase story, with more than one side tracking another, and as the book nears its end and all party’s come together for a final exciting showdown, Ralph Cotton throws in a nice twist as one person turns out to be someone other than first believed.

And if you’re a dog lover, who will be able to forget Sergeant Tom Haines?


Look out for an interview with Ralph Cotton in the next couple of days.
Posted by Steve M at 16:46