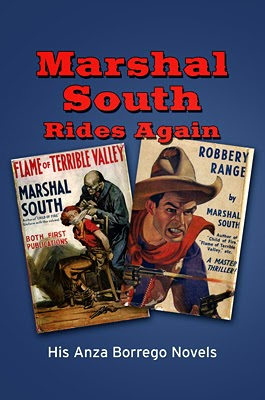 
In Flame of Terrible Valley, Jim Brandon’s encounter with Flame Truman at the ghostly ruins of the Vallecito Stage Station finds him suddenly caught between the dogged vengeance of a Chinese Tong, the quest for stolen gold, and the desire to save this woman from her heartless father and the relentless Tong.

In Robbery Range, a puzzling poem recovered from the papers of a dead stagecoach robber becomes the key to the hidden treasure sought by both the robber’s grandson and the great granddaughter of the stagecoach passenger who had been robbed and killed by the outlaw. Marie Banniston is in grave danger as she is pursued by the Hesfor gang. Can Rodney Kent save her from these ruffians and win her heart?

This beautifully put together book starts with a foreword written by Diana Lindsay which delves into Marshal South’s life; his time living in the desert with his family; and, of course, his writing history. The book also contains many black and white reproductions of Marshal South’s photographs, paintings, and includes some of his poetry (he was considered being named poet laureate of the United States), and this all makes for a fascinating background to the two stories which were both originally published in England, the first in 1935 and the other in 1943.

Marshal South is a terrific storyteller; his books filled with tense situations, intriguing mystery and prose that’ll keep you turning the pages. These two stories are filled with Western action not to be missed. 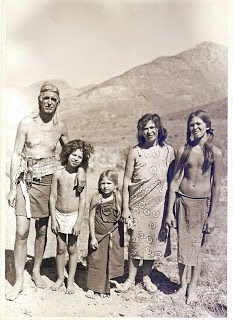 It seems such a shame that Marshal’s South writings have been overlooked for decades, but with this Sunbelt publication that oversight has begun to be rectified. Both stories stand the test of time, and yes they contain some dialogue and views of the pulp days but this adds to the charm of these excellent tales. This definitely is a not-to-be-missed book of western entertainment for all those with a love of the genre.

The South family at Yaquitepec, 1946.