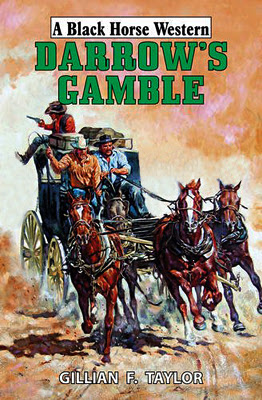 
‘Set a thief to catch a thief’ is a risky strategy for a lawman to take but Sheriff Darrow has very personal reasons for wanting to catch the bank robber, Tom Croucher. Forced to stay in Wyoming and unable to search for the outlaw, Darrow is relying on two convicted criminals, Tomcat Billy and Irish, to do the job for him.

But Tomcat hates Darrow, and Irish wants to go straight. They join Croucher’s gang but who deserves their loyalty – the outlaw or the sheriff?

This is the fourth in Gillian F. Taylor’s Sheriff Darrow series and it’s the first one I’ve read. There is mention of how Darrow became the man who arrested Tomcat and Irish and I’m guessing this can be read about in more detail in the previous book, Darrow’s Badge.

One of Gillian F. Taylor’s strengths is her character studies and how she makes both good and bad likeable in some way, and as you read more about them part of you will be hoping they all survive but, of course, this can’t happen.

I’ve only read two of Taylor’s earlier books and in both of these horses played important and memorable parts and she continues with this theme here. Darrow’s horse being that animal in this story, providing both funny and sad scenes that will stick in my mind for a long time.

The story is filled with lively action, battles of loyalty, and plenty of twists and turns. Darrow’s tough exterior is seen to begin to crack a number of times, especially when he’s wondering if he’s done right in releasing Tomcat and Irish, trust is a fragile credence.

Darrow’s Gamble proved to be an excellent read that left me eager to catch up and the previous three Darrow books and hoping that Gillian F. Taylor doesn’t keep us waiting quite so long (three years between this one and her last) before her next book comes out.