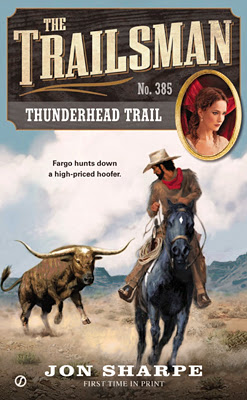 
Fargo is used to tracking down killers and thieves, but he’s never had a quarry like this before. A rancher has just had his one-of-a-kind stud bull wander off into the mountains, and he’s offering a hefty sum to whoever gets it back. But the Trailsman isn’t the only hombre going after the horned bounty – and the disappearance may not have been as random as it seems….

The impressive bounty for the bull draws in a wild mix of characters ranging from three young boys to a seventy-year-old lady, all eager to claim the money. These are not the only people Fargo has to deal with as he’s made enemies of three brothers who are constantly trying to kill him. Then there’s the bull, a massive beast that kills those it feels threatened by….which is just about everyone. If that isn’t enough then someone is killing off the opposition and leaving no trace and there’s a handful of Blackfeet on the prod too.

The action doesn’t let up for one minute in this well told tale that’s filled with edge-of-the-seat situations, memorable characters, savage violence, and dialogue that, at times, had me laughing out loud. As the bull hunters began to fall to the mystery killers’ bullets or knife I soon found myself wondering if anyone would be left alive to claim the bounty on the animal. The author, in this case David Robbins writing as Jon Sharpe, also had me pondering on how the bull could be captured and taken back to its owner…if anyone could get anywhere near it without being killed.

I know some readers are put off this series due to its reputation of containing lots of graphic sex, and yes that was true of the early books, but these days they don’t contain anywhere near as much. This book has one such encounter and that takes up only a couple of pages, so I would say don’t let the adult tag that has been applied to The Trailsman series put you off trying this book as you’ll be missing out on a great read.

6BSteve,
Thank you for the kind words.
You bring up an interesting point. How many readers regard the series as an XXX-Western, when it never truly was? My approach has always been that the whoopie scenes are incidental, and should fit within the context of the plot.
As someone once said, 'The story is the thing'.
:)
David