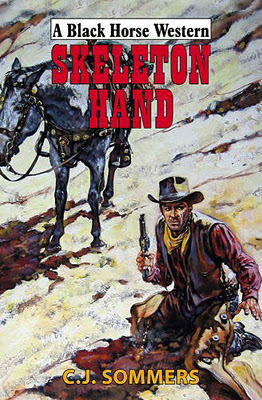 
It wasn’t aces and eights – the so-called dead man’s hand – that the skeleton was holding, but he was definitely dead. Cut loose from the Domino Ranch, Cody Hawk and his friends are facing a winter without work. So when the cowboys come across the skeleton it leads them to its treasure of gold and right into a deadly game, up against a band of killers and a money-hungry woman.

As they make their way across the empty land it seems that the skeleton isn’t holding the only deadly hand: Cody Hawk will need the luck of the draw, and some help from a wild mountain girl, to survive….

At first the story seems to be a straight-forward tale about finding some gold and then deciding what to do with it and trying to second-guess who the skeleton was and how he died. But C.J. Sommers doesn’t leave it there, he has some surprises waiting, one being a major plot twist that really does complicate matters for Cody Hawk as he meets various characters that have valid claims to  the gold, but can he trust any of them? And not only that, there’s the question of who is the person shadowing him?

The story moves forward at a rapid pace and it isn’t long before Hawk is on the run from a variety of people all eager to get their hands on the gold. Everything leads to a dramatic final showdown that concludes the story neatly.

I’ve read one of C.J. Sommers six, to date, Black Horse Westerns previously and enjoyed both that and this one and will definitely be reading more soon.

As to the identity of Sommers I’m sure I know, and will add that he writes under a number of different pseudonyms and I’ve read lots of his books and found them all to be excellent entertainment. If you want to know who it is then check the comments on the last Sommers book I read, and if you are still unsure then here’s the dedication in Skeleton Hand, ‘To Owen Irons, friend and mentor’.

Love the title and the story sounds intriguing. Not a clue as to the author's identity though.uppl