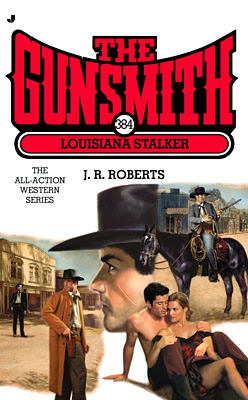 
Capucine Devereaux is being stalked. The infamous Baton Rouge madam is used to unwanted attention from the weaker sex, but one man’s obsession is unnerving her. Making matters worse, Lee Keller, the gunman she hired to deal with her stalker, has his own fixation with Capucine that’s distracting him from doing his job.

In desperation, the madam turns to Clint Adams to get both stalkers out of her life. Keller doesn’t like the idea of being replaced and plans to put the Gunsmith in Boot Hill. But unknown to Keller, Clint has a stalker of his own who’s trailed him from Arizona to Lousiana – and he won’t let anyone else kill his prey…

This entry in the long running Gunsmith series is a tale filled with intrigue as the author doesn’t reveal the identity of two out of the three stalkers until he is good and ready too. This is also the case with the stalkers’ motivations. Both these storylines make for strong hooks that defied me to put the book down until I’d discovered the answers

J. R. Roberts’ smooth, fast-flowing, writing style is a joy to read. His pacing is superb, both building in pace and suspense as all the story threads start to converge, setting the book up for an exciting conclusion as rivers burst their banks and Baton Rouge, and the surrounding areas, begin to vanish beneath floodwaters.

Most of the story threads come to a satisfying end but J. R. Roberts (Robert J. Randisi) expertly leaves one hanging that will be continued in the next book, The Silent Deputy, thus ensuring I will be reading that when it comes out next month.