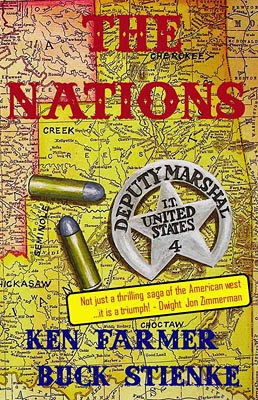 
THE NATIONS also known as "Indian Territory", "Robber's Roost" and "No-Man's Land", was regarded in the latter part of the 19th century as the bloodiest and most dangerous place in the world. It was a refuge for outlaws from all over the North American continent. There were only 200 Deputy U.S. Marshals made up of whites, blacks and Indian to police the vast area of 74,000 square miles under Federal Judge Issac C. Parker, known as the hanging judge.

It is the year 1885. A notorious band of outlaws, known as the "Larson Gang", has been terrorizing Arkansas, Missouri and the Nations for years. When they kill five Deputy Marshals while rescuing Ben Larson, the vicious younger brother of the leader Wes Larson--it is too much for Judge Parker. He orders an all-out concerted effort to capture the Larson Gang and bring them to justice. "If they will not respect the law; then by God we will make them fear it."

This book is based on truth and the authors tell the story extremely well. The opening chapters follow the Larson Gang as they commit a number of violent atrocities which lead to Judge Parker sending Marshal Bass Reeves to round them up. The story then tells of the lawmen's attempts to track down and capture the gang. Other real-life characters have a part to play too, such as Belle Starr and Bud Ledbetter.

Backgrounds of the characters blend smoothly into this fast flowing tale and become a natural part of the story without coming across as bland historical passages. Dialogue is believable and often laced with humour. But for me the action sequences are particularly well done – and there are many of them – as much powder is burnt and lead flies wildly, missing its target more than hitting it. The authors don’t hold back when the bullets strike though, describing it brutally and graphically.

This is Ken Farmer and Buck Stienke’s first western and I can only hope it won’t be too long before they write another. If you like your westerns brimming with authenticity and hard-hitting action then I’d suggest you give this a try.

Thanks for the great review, Steve. The sequel, "Haunted Falls" will be out June 1 by Timber Creek Press. Look for it.
Ken Farmer