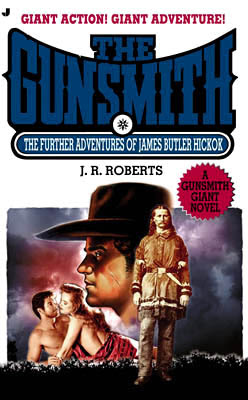 
Clint Adams does not do interviews. So, when a writer from New York tracks Clint down in Denver for a story, he refuses to talk. That is, until he learns that the writer is looking to report on Clint’s old friend, Wild Bill Hickok – and to paint Bill as a coward.

The writer is claiming that most men Wild Bill killed were shot in the back, making Bill sound like some no-good snake. Clint won’t stand for Bill’s reputation to be dragged through the mud. He’d rather break his own rule and sit down with the writer to tell the true story, for once and for all. But to preserve the legacy of one James Butler Hickok, Clint might have to open some old wounds and share some tales he never thought he’d tell…

For all fans of the Gunsmith series, particularly those who’ve read the early books, this giant edition is a must read as it tells the tale of how Clint Adams first met Wild Bill Hickok.

J.R. Roberts switches neatly from the present to various times in the Gunsmith’s past to relate incidents in Wild Bill’s past that Clint Adams also found himself involved in, such as Hickok’s first time on Buffalo Bill’s stage.

Of course the present day story has its own troubles as it seems there are people interested in the writer and the book he is working on, but why?

The story is told in the fast paced style we’ve come to expect from J.R. Roberts (author Robert J. Randisi), being dialogue driven, with bursts of quick-fire action. Chapters are short, two or three pages long on average, and switch regularly from character to character.

Overall, I’d say this is a book that should be enjoyed by all western fans who like their stories to contain real people and don’t mind a bit of graphic sex in their reading material. Me? I’m looking forward to the next giant and in the meantime will be digging out some of the regular sized books I’ve yet to read.

Appreciate the comments, Steve. This book was fun tom write.


Steve _ I've just read 3 Gunsmith books that I had for years and never read, really liked them, fantastic reads, Clint Adams is a great character and the stories were well written, the ones I read are #60 Geronimo's Trail, #112 Guns Don't Argue and #334 Message In The Wind. I hope to read some more :)

You've never read a Gunsmith book before now? Wow. You've got some catching up to do John, and I'm sure you'll enjoy doing so :)

Hi Steve! I just got done reading "The further adventures of James Butler Hickok." This is my first Gunsmith novel, and it was great! It had a ton of great plot twists that kept you hanging on, all through it (loved the scene where Clint and Wild Bill were almost prey on the "Buffalo hunt.").

I am not a huge fan of explicit sex scenes in novels (reminds me of some of my grandmother's "romance" novels that I found on her shelf one day. However, the action sequences and numerous plot twists SELLS this novel (what's up with having steak for every meal though.. I mean I know it's the old west, but sheesh!).

I was wondering if you could put a full list of all the Gunsmith novels (including the giant sized) up here. The penguin website only goes back to the early #300s, and some of those aren't even listed.

Also, couls you post a full list of the Slocum novels (including any giant sized)? I've heard these are good from someone, but don't really know what all books are in the series.