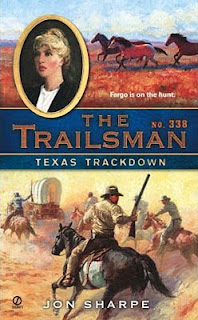 TEXAS TRACKDOWN
As by Jon Sharpe
Signet, December 2009
Skye Fargo is no stranger to the Comanche. He knows how they think, how they fight, and how they attack on the warpath. They’ve taken young Emily Franklin from her family on the Texas frontier, and the Trailsman is going after her. But the deadly quarry he’s chasing down has nothing on the vicious hunters chasing him.

For the second book in a row we have James Reasoner writing as Jon Sharpe, and once more James turns out a cracking read. This is a story with a very fast moving plot that’s filled with exciting action and lots of cliff-hanger situations and chapter endings, all building up to a terrific finale. James also includes a number of twists and surprises along the way.

One of the reasons I like the Trailsman books is that it’s about the only western series being written today that often features Indians (or should that be Native Americans?) as the heroes main adversaries – not just being a small part of a larger plot – and early on in the story Fargo is involved in a tense and frantic clash with a band of Comanche that is very visually written.

Like many books in this series Fargo doesn’t have just the one enemy to contend with. There are others too, and a case of mistaken identity finds the Trailsman in all kinds of trouble.

Fans of the Trailsman series should definitely enjoy this book, as should fans of James Reasoner’s writing. And to those who’ve never tried either, then I’d suggest this could be a great book to start with.
Posted by Steve M at 16:58

I didn't know James was doing these. I'll have to get it now.

If I've counted right this is James' 23rd Trailsman book.

I'm interested in reading a "pulp western". Is this series a good place to start?

It could be as long as you remember it is an adult western series (contains a little explicit sex), it also has some of the top western authors of today writing behind the pseudonym of Jon Sharpe.

There are loads of reviews of Trailsman books on this blog so click the link below the review and read a few more, or just look around the blog and see if any of the other books/series catch your attention.

Actually, these monthly adult westerns (Trailsman, Longarm, Gunsmith, Slocum) are really the closest thing we currently have to the old monthly western pulps. If you're looking for a 'pulp western' then I would say any of these are a good bet.

Me again. Thanks for the suggestions. Actually, I'm not looking for high cuisine. I'm looking for junk food, so the more sleaze and violence the better.

I'm going to assume that it's not necessary to read the Trailsman series from the beginning or in any particular order?

Yeap, you are correct with your assumption, you can jump into the series anywhere.

Cool. Thank you very much for your suggestions.