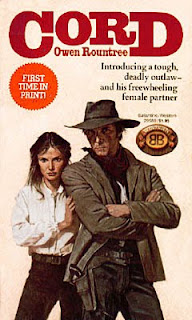 as by Owen Rountree
Ballantine, April 1982
Cord is tough – an outlaw, a bank robber, fast, and deadly with guns.

This time Cord and his female partner in crime, Chi, are on the run – in two different directions. One of Cord’s old-time lawbreaking buddies needs a favour – and for Cord it’s a chance to settle an old score in a town that’s being overrun by the wrong kind of outlaws…

This is the first in a nine book series.

Owen Rountree presents the reader with an action packed, and brutal, read; both in descriptions of violence - which are, at times, quite graphic - and in some of the language used, swearwords of the strongest kind, more often than not uttered by the books heroine, Chi.

Chi and Cord seem to have a love/hate relationship, both work well together yet both are willing to go-it-alone, and in the process will double-cross each other. Chi seems to act the most rashly, jumping in mouth or guns blazing before thinking.

Rountree also includes a great character in Brocius, a dwarf that keeps appearing where least expected, and seems to know more than he lets on – or does he?

The story is very fast moving, and Rountree’s writing style is very readable. The book introduces Cord and Chi well and has me wanting to read their next adventure very soon.

Owen Rountree is a pseudonym shared by William Kittredge and Steven Krauzer.
Posted by Steve M at 15:16

Cord sounds like a lot of fun. I'll have to look into purchasing that one.