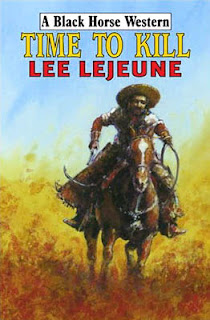 by Lee Lejeune
A Black Horse Western from Hale, May 2009
Ten years after the end of the Civil War, Nat Jordan, who fought in the Confederate army, is returning by railroad to his home near Kansas City. When they are held up by so-called Quantrill raiders, led by Captain Coulter with whom Jordan escaped from Union forces during the war, Coulter recognizes Jordan and this soon leads to complications.

This fast moving, action packed, book is filled with memorable characters: such as Jordan, Coulter, McGill, Preacher Man and Rig. Lejeune keeps you guessing as to which side of the law they are on, and so hooks the reader superbly, and only reveals their true agendas when he wants you to know, thus adding a number of twists and surprises to the story.

The relationship between Jordan and Coulter is explained in a number of flashback sequences that are set during the Civil War, allowing for some savage confrontations between Union and Confederate troops.

Another fascinating relationship is that of Jordan and his father, and it is this one that creates an air of suspicion over Jordan’s loyalties.

Among all the violence and mistrusts there is another relationship, one from Jordan’s past, with a girl he grew up with. Could his renewed friendship with Beth develop into something more? Will his more violent past allow it to?

And what of the end? How does everything work out? Those are questions I’m not going to answer, instead I’ll suggest you buy or borrow a copy of this book and find out for yourselves. What I will say is Lejeune finishes the book with a final line that hints at more to come, and thus ensures this reader will be keeping an eye-out for more of his work.

Time to Kill is out now, its official release date being two days ago – May 29th.
Posted by Steve M at 11:29