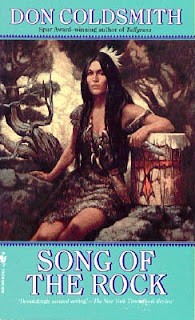 SONG OF THE ROCK
by Don Coldsmith
Bantam, July 1991
original Doubleday, Sept. 1989
Choosing the eerie Medicine Rock as the location for his vision quest, White Fox seeks guidance for the destiny of the People through the ancient practices of fasting and meditation – and receives a strange omen of evil instead. On the way back to his tribe he discovers the corpse of a warrior laid out for burial, and when he stops to investigate he is set upon by a beautiful female attacker who disappears without a trace. Haunted by her memory and his own dark visions, White Fox finds himself strangely drawn back to Medicine Rock – and to the aid of his mysterious enemy, who battles a greater evil than his people have ever known.
Don Coldsmith presents the reader with a beautifully written book. A story that starts gently but has enough subtle hooks to snag the readers imagination to ensure they read further. The vision quest brings more questions and then the discovery of the body will have you well and truly caught up in the storyline.
Coldsmith’s characters are well drawn, particularly the mysterious female, and when you find out about her past, her childlike innocence, she’ll touch your heart.
If you like romance then the growing admiration, attraction, between the two main characters will be a pleasure to read.
But it’s the main thread of the story that makes this gripping reading, and Coldsmith sure knows how to involve the reader emotionally with his use of the written word and by using a theme that all of us have created within our own minds at sometime; something we can all relate to with a fascinating and compelling horror.
Posted by Steve M at 09:46

Not read the book but isn't that a wonderful cover picture. Makes me want to propose

The artist for this series, Tom Hall, really does come up with some stunning work on these books. His paintings can also be found on the Mountain Majesty series too.