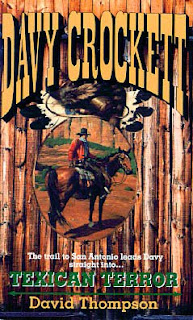 TEXICAN TERROR
as by David Thompson
Leisure, May 1998
When Davy Crockett and his old friend Flavius led a small party of settlers into San Antonio, all he expected was a sleepy Texican town. He didn’t realize San Antonio lived in terror of the vicious freebooters who pillaged the countryside and laughed even at the Spanish Army.
When the bandits kidnapped one of Davy’s party, they may have taken on more than they could handle. Davy’s tracking and fighting abilities were legendary throughout the West, and he would use every ounce of skill he had to hunt his human quarry through the Texas badlands – along a trail that could lead only to death.
Crockett, Flavius and the small group of people who survived the previous book arrive in San Antonio, and, as romance blossoms for two of the party, Crockett gets his first look at Texas. He likes what he sees until he finds that San Antonio is living in fear.
Another hit story in this great series. Another book of none stop action that is one of the trademarks of David Thompson. Brutal at times, funny at others, as the well-drawn characters struggle to survive.
The leader of the freebooters, ex-pirate Tar, is a worthy adversary for Crockett. I particularly liked his first appearance with head a-fire. Right from then you just know Davy is in for the fight of his life.
All the threads in the tale are tied up neatly by the end, as is to be expected of author David Robbins – writing as David Thompson.
And Davy’s promise to Flavius that they’ll definitely head for home after the terrors experienced in Texas just means I’ve got to read the last book in the series right away to find out if Flavius’ wish will come true.
Posted by Steve M at 09:34

I grew up reading Davey Crockett tales. #7 sounds like a very entertaining read.

Flavius was one of my favorite characters in that series. It has been several years since I have last read them. Thompson always ties up his stories well.

Not just number 7 David, the whole series is worth reading. (There's eight of them altogether)