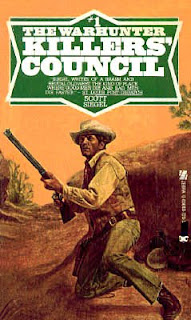 KILLERS’ COUNCIL
by Scott Siegel
Zebra, 1980
Warfield Hunter’s personal vendetta against the Farrel gang led him to the little town of Kimble – just in time to save the sheriff’s life in a shootout with three of those deadly killers. But Hunter knew that Farrel would never stand for this, that Kimble was a doomed town unless everyone backed up the sheriff. What he didn’t know was that certain prominent citizens had decided it was to their advantage for Kimble to be destroyed – and how could even War Hunter save a town that was bent on its own destruction?
Scott Siegel has written a very readable book in Killer’s Council. He fills it with many scheming characters and much of the book is about these people whilst Hunter spends most of his time reminiscing about old times and recalling his childhood with the aging lawman of Kimble, who knew Hunter as a young boy. It’s during these moments that the reader discovers why Hunter is after Farrel.
There are a few burst of action along the way, but most of the story is used to build up the suspense of waiting for Farrel and his gang to ride into town, and when he finally does Siegel produces a fine final showdown that at times provides some savage reading.
For me though, I was a bit disappointed that Hunter got shot through the back yet still managed to fight as well as if he hadn’t been shot. Personally I think he’d have been out of commission after taking such a hit.
Even though there was a bit too much reminiscing for my taste, and that somewhat unrealistic ability of Hunter to continue fighting after being so badly shot, I’m sure I will be reading the second book in the series soon.
Posted by Steve M at 15:59