The Marshal from Paris 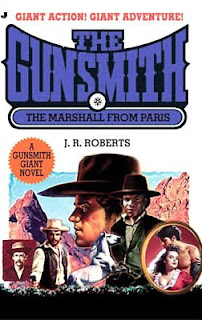 A GUNSMITH GIANT NOVEL
as by J.R. Roberts
Jove, November 2008
Clint Adams pays a call on his old friend, Bass Reeves, the finest lawman in Paris, Texas, and the only black federal deputy marshal west of the Mississippi. That means daily battles with ignorance and prejudice as well as outlaws. But when Clint and Bass team up to nab a gang of black desperadoes, they will prove the hard way that justice is colour-blind…

This assignment is anything but routine, since one of the crooks is Bass’s young cousin. When the outlaws use the young man as a pawn to ambush Bass and rob a bank in Sherman, the Gunsmith must balance mercy with some well-placed bullets…

The Marshal from Paris is the thirteenth giant edition in the long running Gunsmith series, although it’s not that much longer than a regular edition, about forty pages longer in fact.
Like many Gunsmith books this one sees Clint Adams team up with a real person from the history of the West, Bass Reeves. It’s believed Reeves was the first African American to be commissioned as a U.S. Marshal west of the Mississippi River. As the book blurb states his colour leads to a number of confrontations based around bigoted views. 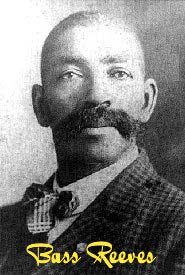 As expected this is a speech driven story that moves forwards at great pace, with the majority of the chapters only lasting for an average of three pages. There’s plenty of action, of more than one kind - after all the Gunsmith is an adult western series. The author (Robert J. Randisi) switches between characters frequently and adds to the main plot of the hunt for the black outlaws by having them falling out with each other, planning to double-cross, and even kill, each other.

If you’re a fan of books containing real people from the West, a fan of the Gunsmith series, or someone who just enjoys a fast moving, well told story, then I’d say you should consider giving The Marshal from Paris a try.
Posted by Steve M at 20:36

Many thanks, Steve. This was a fun book to research and write. I'll try and make the Giant Gunsmiths more "giant" in the future.

When I was hunting for a picture of Bass Reeves I found myself reading about him, and it was interesting to see how much true info about him you'd included in the book.

Great review - there's a good bit on Bass Reeves in the book The Shooters.