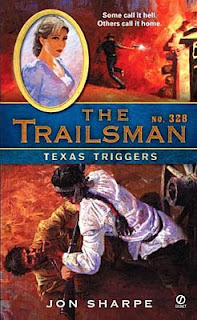 TEXAS TRIGGERS
as by Jon Sharpe
Signet – February 2009
Skye Fargo is high, dry, and about to die in the heart of Apache country when he stumbles on a ramshackle ranch worked by a family of hardheaded hill folk who own the most valuable thing in the sunbaked hell of west Texas: a water spring. But if they want to hold on to it, they’re going to need more than cold liquid. They’ll need the Trailsman’s hot lead.

If you like tough characters of both sexes then this book is full of them, all out to get what they want with total disregard for others in the desperate struggle for life-giving water. Not only do we have the hill folk and the cattle rancher and his crew but there’s also the added complication of the Apaches.

Jon Sharpe – in this case David Robbins – provides the reader with a very fast paced book filled with action and a number of surprising twists which can only make you wonder as to who will be left alive at the end.

To balance the more brutal scenes in the book David Robbins includes some excellent, humorous, dialogue. The names of the three daughters also produced a big grin from me.

For fans of The Trailsman series and/or David Robbins work this is a must read, and for those who like fast moving, action filled, westerns, then I’d say you won’t be disappointed with this book either.
Posted by Steve M at 15:06

This sounds really good, and that cover is fantastic!

The Trailsman books are about the only western books published today that show actual scenes from the story...and the publishers use some excellent artists too.

What were the three daughters' names in this one, Steve? Some years ago I came across Faith, Hope and Charity in a series western and thought that would be hard to beat.
I use names of the same kind myself. I have a Prudence and an Honesty in my work-in-progress, a Verity in my first western, a Faith in the last completed, a Liberty in my planned next.

They all have the same name Keith, Sissy One, Sissy Two and Sissy Three - which means you have to pay attention at time as to which is doing what. Why they have the same name is explained in the book as you'd expect and helps define the character of their mother.
Like the Faith, Hope and Charity (and I'm sure I've read that one) it makes them stick in the mind.