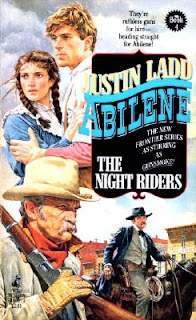 THE NIGHT RIDERS
as by Justin Ladd
Pocket Books – October 1988
On a day of searing heat and swirling dust, new settlers arrive in Abilene – dirt-poor farmers in covered wagons, determined to set down roots and make a living from the land. But in the Kansas cattle town that means trouble – angry ranchers, rash threats, and violence just around the bend.

Marshal Luke Travis and Deputy Cody Fisher are fighting a tide of barroom brawls and exploding hate. The farmers are strapping on six-guns to protect their women and their land. But one rancher has a cutthroat streak – and a band of outlaws in his pay. The masked riders strike hard and fast. They raid at night, aiming to kill. And two lawmen must face them in a brutal, final showdown!

There’s plenty going on in this book with various people who live in Abilene getting involved in the struggle to keep the peace between the farmers and the ranchers. Even though the reader thinks they know who is behind the troubles the author (James Reasoner writing as Justin Ladd) has a couple of twists waiting to turn these thoughts around.

For followers of this series most of the main characters you’ll have met in earlier books have a part to play as do some newcomers, such as the school teacher, who one hopes will return in later books. In fact this school teacher provides one of funnier moments in the book at the train station.

Like all great multi-character series many of the developing relationships between these people are left hanging to be carried on in the next books, particularly that of Marshal Travis and Aileen Bloom now that the school teacher may come between them.

I for one am looking forward to reading the next book in this series and if you’ve yet to try the Abilene series then may I suggest you do something about it soonest.
Posted by Steve M at 16:51

An excellent series, and the way the books all tie together is amazing.

It's a series that would definitely benefit from being read in order if possible. And I have to give credit to the editor, Paul Block, who wrote the first book and created many of the characters.

Now I've got to read this series. Thanks for the info if not the inevitable dent in my wallet.

I'm sure you'll enjoy this series Gary, there's sixteen books in all.