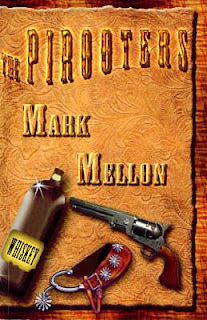 by Mark Mellon
Sundowners, 2007
“I leave it up to you to decide whether I told the truth or the biggest windy you ever heard in your life.”
San Antonio, Texas, 1916. Jim Ed’s hot temper keeps him in constant trouble with his father, Leo Pargrew, a wealthy lawyer. After a long absence, the Pargrews are visited by Leo’s father Virge, an old cowman, come to reconcile Leo with his family. While staying with Leo, Virge tells Jim Ed a yarn of hair-raising exploits with his wild granduncle Heck in search of Jim Bowie’s legendary silver mine down in old Mexico in 1865 with Comanches, bandidos, and French Foreign Legionnaires all in hot pursuit. Enthralled by the tale, Jim Ed doesn’t know whether to believe it, but one summer at Virge’s ranch, he learns the real secret of the lost treasure of Santa Perdida.
Mark Mellon has created some wonderful characters in Virge, his brother Heck and their ex-slave Old Mose. Virge’s telling of their adventures to Jim Ed makes for very entertaining reading as they move swiftly from one dangerous predicament to another whilst hunting for the lost mine.
There is plenty of bloody action that at times is graphically described, such as the torture scene where the Comanche skin Virge’s finger.
The story moves at tremendous pace to the final violent battle that has an impressive death toll, which painted some very visual imagery within my minds eye.
Most of the story is told as flashbacks to 1865 but the scenes set in the books present provide some very real and relatable situations of conflict between different generations.
Towards the end Jim Ed asks a question that leads to Virge replying, “that’s another story,” and that’s one I’d like to hear too, so Mark, any chance of Virge and co returning in another book?
Posted by Steve M at 11:39