Frank Roderus kindly agreed to be interviewed for WFR. Frank has had around 300 books published, with many more to come, the majority of which are westerns. Some of these books have appeared under his own name with the others being published under a variety of pseudonyms. So for the well-read fan of westerns chances are you’ve probably read some of his work without realising it.

I can't claim that I ever did 'decide'. It simply...was. My grandmother had been a country school teacher, and she made teaching me a special project starting at age 3. I wrote my first story at age 5. It was a western, typed on my father's portable typewriter. My mother kept it for the remainder of her life, and now my wife has it put away somewhere. I can still recall running in to the kitchen to ask my mother how to spell this word or that.

My first book was a young adult titled Duster. It was a western, in fact was voted in second place in that year's Spur Awards. Between that original publication and later reprints it was available in print for roughly 25 years. It never made much money but selling it was one of the biggest thrills of my life. 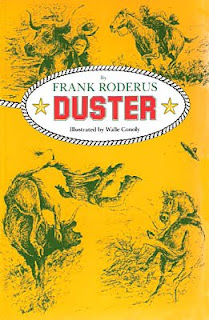 How many books did you write before the first was accepted for publication?

I believe Duster was my fourth completed manuscript, but I had made countless failed starts before that time.

John Steinbeck, John D. MacDonald, Mackinley Kantor. When I was a boy I learned much from the nameless contract authors who wrote the Red Randall Flying Ace series and of course from the Hardy Boys. Those fellows could keep a story moving.

Do you work on more than one book at a time?

Yes, I do. If I happen to have enough work to justify two at once.

Do you wish you had more say in the covers that appear in your books?

No, not really. I don't know much about the art of attracting a potential buyer's eye; I hope they do. 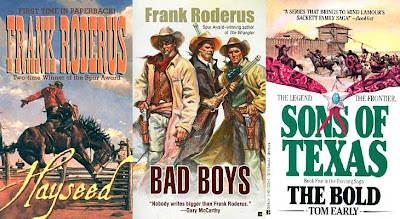 How important is historical accuracy in westerns?

It can be important in a certain kind of setting, if you are using real battles or real people. And of course your details - guns, tack, available consumables etc - have to be accurate as to the era involved. Otherwise accuracy is much, much less important than the story being told. I've made up entire mountain ranges...and in fact have had readers comment that they remember camping beside a stream I described when in truth it was all imagination created to fit the needs of the story or the whim of the storyteller.

It was an era of boundless freedom and opportunity. I've loved it all my life.
Which western writers would you recommend?

Elmer Kelton is probably the best among us today. Peter Brandvold. Gary (NOT Cormac, thank you very much) McCarthy. Douglas Hirt.

What’s your opinion on keeping dead authors alive by having someone write new books under their name, like is happening with Ralph Compton and William Johnstone?

I have done a little of that myself. It was a paycheck and I feel no need to apologize. But I think it cheats the reader unless it is made abundantly clear that his old favorite is no more and the real author's name is prominent on the cover.

You’ve written under many pseudonyms for different series, which of these series have you enjoyed writing for the most?

Without question that would be the Longarm series. My pal Custis Long is still fun to write largely because with him we can be playful, and so can he, while still telling a cracking good yarn. 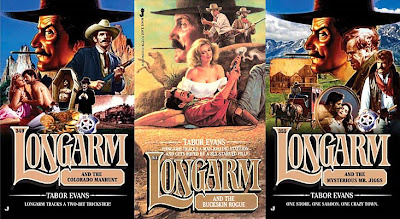 You’ve been writing Longarm books since the early 1980’s, are you still doing so and which of these are your favourites?

The series has added more than 300 titles since I came aboard, as one of four writers, with No. 53. That was a very long time ago, and I am still doing them, still having fun with them. Don't think I could single out any one book as a favorite though.

I noticed your name on the copyright page of the first Man of Honor novel, (as by Gary Franklin) will you be doing anymore of these?

I am the Franklin in that duo; Gary McCarthy is the Gary part of it. We really enjoyed writing Joe Moss and would love to do more, but that would be up to the publisher. At this point I would say the odds of that happening are on the slim side. 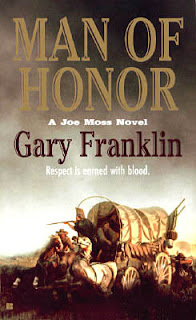 You’ve also won a couple of Spur Awards, which books were these for?

I won in 1983 for Leaving Kansas, the first of my Harrison Wilke books and again in 1996 for Potter's Fields which is far and away my favorite of all the books I've written. 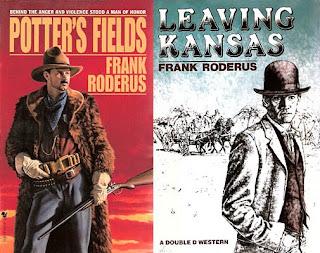 I’ve noticed your name on a Black Horse Western from English publisher Hale, is this a recent outlet for your work and are these new stories?

The nice folks at Hale reprinted a number of my titles some years back and now we have reconnected for some more. All my work with them has been reprints of books first published in the U.S.

As BHW are usually shorter than your average paperback western did you have to edit these previously published books to fit the length of story requested by Hale?

I generally write a fairly short book anyway. If anyone edited those for length it was not me. 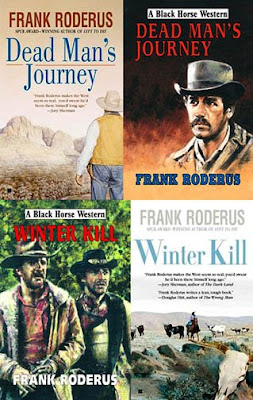 Which of all your westerns, under your own name or a pseudonym, would you recommend to someone who hasn’t read any of your work yet and why?

That would depend on the age of the reader, I suppose. For a youngster I would suggest either Duster or Journey to Utah. For an adult reader either the aforementioned Potter's Fields or, again, Journey to Utah. And yes, you may safely infer that those have been my favorites. 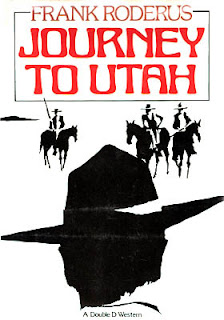 I still love the west and the western. Every few years, though, someone who claims to be knowledgable about publishing will pronounce the western genre dead. Obviously I am in no position to know, and am certainly prejudiced in favor of the western, but it is my sincere hope that the genre will continue to entertain - and to inform - for generations yet to come.

Finally what do you read for pleasure?

I read a lot of history - early U.S., ancient Greece, Rome and Britain - plus modern crime fiction. What I do NOT, with rare exception, read is westerns. I do not want to read a plot twist in someone else's book and love it but then not be able to steal it. Better that I not read it to begin with so I can duplicate with a clean conscience. 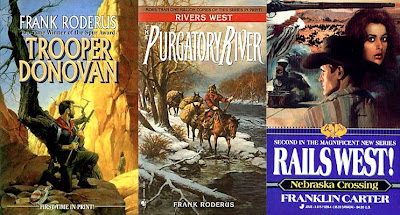 yet another great interview - your knowledge of the western genre is far better than mine and I'm enjoying discovering some of these writers.

And more congratulations from me, too. The blog's latest balance between interviews and reviews of old and new books is just right.

Thanks fellers, your comments are very encouraging. There's lots more of the same kinda thing in the pipeline.

I have been a fan of Frank Roderus, the writer and the man, for more than 25 years! I'm so proud to know him and enjoyed this interview very much because it reflects the author I have so admired for so long. I hope it will win him more readers and sell lots more books!

Very nice interview. Informative, interesting, and it makes me want to go out and find another Roderus novel. It's been awhile. Too long, really, since I've read one.

Greg, glad you enjoyed it.

Madshadows, son? I'm only a couple of years younger than you LOL

Ben, happy hunting, although I don't think you'll have any trouble finding one of Frank's books.

Another nicely handled interview. Thanks for doing these, Steve!

Thanks Duane, there's a few more in the planning stages.

Gary McCarthy says: Frank Roderus is a wonderful storyteller and person. What I like most about his novels is that his characters are always a little quirky and off beat which makes them more interesting and memorable. He takes the western genre in new directions and is quite the stickler for historical accuracy. You can't go wrong reading this guy. Ever.

Great author. And no, the Western genre is not dead. I'm reading 5 westerns to 1 non-western