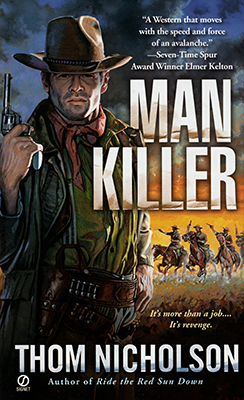 
Out of the ashes of Confederate defeat, soldier Martin Keller heads west for a new life as a rancher. But hard times like these call for a more practical means of survival – such as riding posse alongside the Texas Rangers. It’s not a job that comes without risk or enemies, as Keller discovers the hard way when his family is brutally murdered.

Hopped up on rage and burning for revenge, Keller severs ties with the Rangers, tracks the cutthroats into the Indian Nations, and restyles himself as an unforgiving bounty hunter with no rules of remorse. To good citizens and desperadoes alike he’s known as Man Killer. And he’s not giving up until the men who murdered his family are planted in boot hill….

This is the second book in the four book series featuring Marty Keller, the first, Ride the Red Sun Down was published a year earlier. Strangely, Man Killer tells of events that take place and lead up to those that take place in the first book, and that book also contains a recount of what happens in Man Killer. Perhaps the publishers mixed up the order they put them out in? Whatever the reason let me stress that to get the most from these two books you need to read them the opposite way around to their publishing dates.

Seeing the changes in Keller makes for some fascinating reading. The transformation from a tough Texas Ranger and loving family man to a colder, determined killer is the core storyline of this tale.

Thom Nicholson doesn’t pull any punches when it comes to describing violence. It’s graphic and brutal, especially the killing of Keller’s family.

Nicholson tells the story from a variety of viewpoints and switches fairly regularly between the main characters, these being Keller and the men he is hunting. Having the outlaws split up makes Keller’s task virtually impossible. In fact, there are times that Keller is at a total loss with how to find the men he desperately wants to kill. Lack of finance to fund his quest sees Keller having to take other jobs and this is how he becomes a bounty hunter.

Keller stands out from nearly all the other characters due to his speech; he is a very well-spoken person whereas all the others use slang and some western lingo.

If you’ve read Ride the Sun Down first, as I did, you’ll have some idea as to how the story will end for certain characters which did spoil this book a little for me. Still it was interesting to see how this happened.

Hopefully the next published book is really the third in the series. I guess I’ll find out soon enough as I’m looking forward to reading it in the very near future.

Sounds brutal and exciting, maybe to much of brutal and not enough of excitement. But, that's contradictory. Will have to find out.

Aw, bummer. The book sounds very good, but only the last two are available digitally.