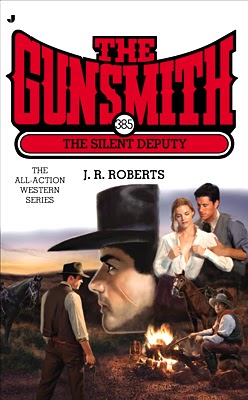 
The Gunsmith is being followed – but so far, his stalker hasn’t shown any sign that he’s got a mind to kill. Clint Adams has no clue as to the young man’s identity or motive, so the only thing killing him for the moment is his own curiosity.

Clint’s chance to lay low turns calamitous when a saloon in Labyrinth, Texas, is robbed, leaving two dead and one wounded. Suddenly the Gunsmith finds himself acting as sheriff, and there’s a mysterious stranger keen on playing the role of his new deputy…

This book continues a storyline that started in the previous Gunsmith novel, Louisiana Stalker, but you don’t have to have read that one first to enjoy this book as J. R. Roberts includes just enough background information to explain what happened previously. Roberts expertly weaves this ongoing story thread into the plot of this book.

Like the majority of Gunsmith books this is a very fast moving tale laid out in short chapters, of which most are about three pages long. This encourages the reader to read just one more chapter, then another, and before you know it the end has been reached.

The main storyline is of the Gunsmith on a vengeance hunt, out to kill those who robbed the saloon and shot his friend, Rick Hartman. The straight-forward revenge plot is enhanced by having the Gunsmith’s stalker riding alongside him and further complicated by the reason behind the robbery and shooting.

Does the Gunsmith find out who the Stalker is? Does he discover the Stalker’s reasons for tracking him? I don’t think I’ll spoil anything by answering both those questions with a yes, but I won’t reveal any more than that.

Like many times before, when finishing a Gunsmith book, I was left feeling thoroughly entertained and eager to pick up another.

Now you have me wondering - sounds fun.