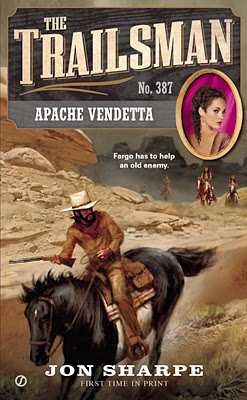 
1861, New Mexico Territory – no one stops an Apache out for vengeance.

Years ago, Skye Fargo barely survived a scrap with an Apache called Red Knife. Now Red Knife needs Fargo’s help to find the white men who raped and killed his daughter. The army wants Fargo to do it so the Apaches will be pacified. But Red Knife wants blood, not justice – and the Trailsman soon finds himself caught between his orders and his old foe’s rage….

Trust, this is a word that Fargo has trouble with in this tale. How can he trust an Apache’s word that he will not kill those responsible for his daughters’ death? An Apache who is feared throughout the land, a brutal killer who says he will stop killing if the Trailsman helps him track down his prey.

Jon Sharpe really piles the problems on for Fargo in this story, as it’s not just Apaches he has to keep his eye on, as the word is out of his mission and white men want his blood for helping a notorious killer. This all makes for some extremely tense situations and some exciting violent action.

The author, David Robbins writing as Jon Sharpe, adds a few lighter moments to balance out the more savage aspects of this tale, such as Fargo being disguised as a woman to sneak into a girls’ home, a funny scene when you consider that the Trailsman has a beard.

As this story gallops towards its bloody, and graphic, climax it becomes apparent that Red Knife is always a step ahead of Fargo. Can the Trailsman succeed in capturing the men he hunts and take them back to the army alive or will the double-crossing Apache fulfil his quest in killing those men slowly? That I can’t reveal here, but I’m sure fans of both the Trailsman series and David Robbins’ writing will enjoy finding out.

Fargo in a bonnet does boggle the brain. :)