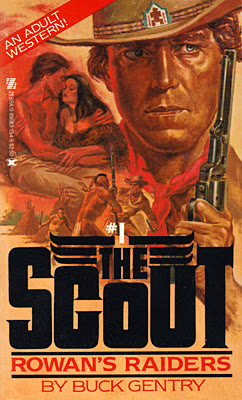 
Orphaned at eight and a frontier runaway at fifteen, Eli Holten spent six years of his life in the camps of the fierce, savage Oglala Sioux learning the ways of the plains. Driven by his restlessness, ruthlessness and cunning, famous for his tracking, hunting and killing expertise, Holten was compelled to move on. He returned to the white man’s civilization and became an Army scout.

Now he leads the way for Army wagon commands, venturing into Indian camps to parlay with hostile chiefs and serving as a courier through hundreds of miles of treacherous wilderness. With each new danger-filled adventure he risks his life and dares to tempt death. He is a man to respect, a warrior to fear and a professional who knows the meaning of revenge.

The early 1980’s saw the launch of many series tagged as adult westerns and The Scout series falls into that category. The first book appeared in 1981 and the final one, number 34, in October 1992. Buck Gentry is a pseudonym behind which two or three authors wrote. I’m not sure who wrote this one.

If you don’t mind some explicit sex scenes in your westerns and enjoy tales revolving around Army verses Indians then The Scout is a series worth considering.

The story is extremely fast moving and jam-packed with action. Holten barely has chance to catch his breath before being involved in more deadly clashes. Some of the descriptions of these bloody encounters are fairly graphic and Holten isn’t immune to taking a hit or two – although he does seem able to shrug his wounds off and carry on easily whereas many men would be struggling to continue. The only slight criticism I have is that twice Holten was caught in a virtual no escape situation and his nick-of-time rescue came about in an almost identical fashion.

Buck Gentry created a great lead character in Eli Holten and a memorable supporting cast. His story offers one or two twists and all his plot lines are neatly resolved by the end.

I found this to be a very entertaining read and will certainly being reading the next book in the series soon.