A KILLING IN KIOWA 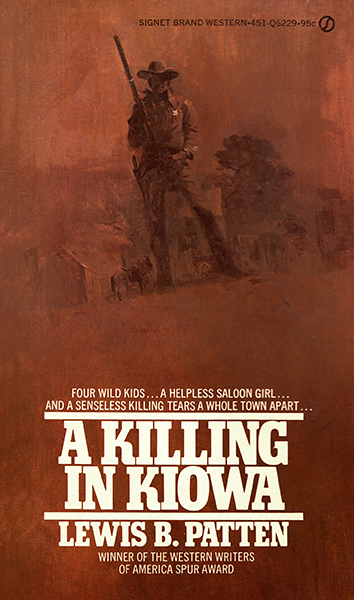 None of the four was really drunk, but all were feeling reckless and wild. They’d been talking about women and all four wanted one. Not one of them would have dared attack Daisy alone, but tonight they were a miniature mob. She was only a girl from the saloon. For money she’d probably take on anyone. Well, tonight she was going to take on all four of them. And she wasn’t going to get a dime for it . . .

The vicious events that follow force Matt Wyatt, sheriff of Kiowa, to a bloody showdown between the law and the lawless . . .

A story that mixes western and murder mystery extremely well. Who did the killing isn’t really a mystery as Daisy knows who attacked her and the victim names two of them before dying. Part of the book follows Wyatt’s as he tracks down and arrests the four young killers, two fifteen-year olds, one sixteen and one seventeen.

The intrigue comes from the fact that Wyatt knows them all, knows their families. One of the killers is his deputy’s son. Wyatt is also in a relationship with the deputy’s daughter. Enforcing the law puts a massive strain on these friendships and could bring about the end of them.

Two other fathers are desperate to save their sons from prison and the noose. They aren’t above threatening Daisy and the Doctor to change their stories. If bribery isn’t enough then there’s other methods. How can Wyatt keep the killers in jail if the witnesses won’t back his play? It’s these storylines that really gripped me and kept me turning the pages.

This is a fairly dark tale. It’s a gritty story that never lets up in pace and one that made it impossible to guess at its outcome. Wyatt is badly wounded about half-way through the story, a brutal wound that could kill him but bringing the killers to justice seems more important to him than his own life.

A Killing in Kiowa is a short book compared to today’s standards and I wish it had been longer. Although the conclusion is satisfactory, I felt there was more of the story to tell. Perhaps the author intended for his readers to decide how a couple of the unfinished story threads came to an end. Even though the book finished in this way, I still enjoyed it and look forward to reading more of Lewis B. Patten’s work soon.

Thanks Steve for the fine review. I read "A Killing in Kiowa" at least ten years ago and still remember it vividly. This novel represents Lewis B. Patten at his best and that is saying a lot.